Founded in 1993, the Center on Law, Ethics and National Security (LENS) promotes education and discussion of the complex and diverse issues involved in national security. These include such domestic law topics as the role of the respective branches of government in security matters, the legal and policy implications of counterterrorism operations (including surveillance at home and abroad), as well as the investigation and prosecution of national security cases. On the international side, LENS addresses such topics as the use of force in international affairs, the law of armed conflict, the impact of security issues on international business endeavors, and the emerging global role of cyber and artificial intelligence. Infusing all of these topics is a deep concern for the often extraordinarily difficult ethical issues that pervade national and, really, global security matters.

At its core, LENS is focused on preparing the next generation of national security leaders, but also aims to advance for all a greater understanding of the role of law and ethics in an increasingly complex global security environment. 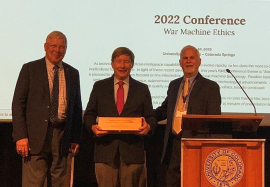 Receive our monthly newsletter with notifications about upcoming events, programs, and conferences.