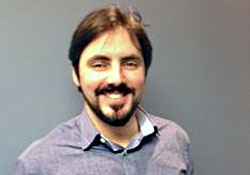 As the director of the Ocean Program at the Environmental Law Institute (ELI), Xiao Recio-Blanco oversees a range of projects directed at the conservation and sustainable use of marine resources.

Recio-Blanco manages initiatives along a broad spectrum of legal frameworks involving domestic and international law. Since joining the Ocean Program in early 2016, he served as a primary drafter of a handbook, published in collaboration with the National Geographic Pristine Seas Project, that summarizes legal tools and approaches developing nations, nonprofit organizations, citizens, and others can use to enforce and protect “marine protected areas,” such as marine reserves where fishing is banned or limited. Promoted to director in November 2016, he also is engaged in developing legal strategies for the use of environmental DNA for regulatory policymaking, researching ways to help governments in the Caribbean implement marine spatial planning, a process analogous to land-use planning.

He describes one ongoing project as particularly important to him, as it is closely tied to interests that spurred his studies at Duke Law and were central to his SJD dissertation: sustainable management of small-scale fisheries in developing nations. “In the Oceans Program we have started working on the development of marine spatial planning to ensure ocean conservation and sustainable use, with a focus on small island nations and developing nations.”

Despite a longstanding interest in environmental law and public policy, Recio-Blanco’s career path had a different focus before a “life-changing” research trip in Mexico cemented his interest in fisheries and oceans.  Having chosen to study law at Complutense University in his native Spain because of the degree’s versatility, he was inspired by classes taught by an “exceptional” professor of international business law to focus his early career in that field, as well as international private law, joining Santander Bank in Madrid after graduating. After four years, Recio-Blanco became an associate professor of international law at CIDE, a public university in Mexico City, where he taught both private and public international law.

“A major characteristic of the culture of CIDE was that we had our classes and courses but many professors collaborated with the federal government and with NGOs conducting research projects,” he says. So when the World Wildlife Fund, an international conservation group, needed help with research in Baja California Sur on the Gulf of California, Recio-Blanco signed up.

“They were conducting an analysis of fisheries regulations and enforcement in the area,” he says. “There were major problems enforcing regulations, and this project was an on-the-ground look at what was really going on there. It turned out to be a life-changer for me.”

He found himself fascinated by the process of conducting research outside the theoretical realm. The challenges of balancing the need for conservation with the socio-economic realities faced by the people who rely on the environment made for a more complex problem than simply “considering conservation in a vacuum,” he says. “I enjoy complexity. And it felt like a better solution, a more real solution, would have to involve factoring in the fact that, in many developing nations, fisherman who are told not to fish because of conservation measures can literally go hungry.

Recio-Blanco made his experience in Baja California Sur the basis for his dissertation proposal in Duke Law’s SJD program, which he entered immediately after obtaining his LLM.

“My dissertation was focused on trying to identify legal tools to solve the problems associated with unsustainable small-scale fisheries in developing nations, particularly in the context of Latin American and Caribbean nations,” he says. He utilized theories of area-based management models and marine spatial planning, which incorporates an analysis of ecological factors and human activities in a given marine area to establish a comprehensive system of plans and regulations for the region. “It’s basically ocean zoning, in order to try to establish which areas are more suitable for certain uses, from fisheries to creating no-take protected areas,” he says.

“Xiao was an exemplary SJD student at Duke, just the kind of curious and creative intellect we hope to attract,” Wiener says. “Now he has built on his excellent SJD dissertation — on fisheries and marine spatial planning — to become a real leader in ocean law and policy.”

Recio-Blanco says he benefitted from discussing his dissertation ideas at Duke Law with his fellow SJD candidates with whom he shared an office, even though they were researching different topics.

“It really helped me move my ideas forward,” he says. “We helped push each other to keep working hard. Something as simple as having that common space was very, very useful.” While at Duke, Recio-Blanco also audited courses at the Nicholas School of the Environment and the Sanford School for Public Policy to augment his legal education.

Although he hopes to return to academia at some point, Recio-Blanco’s research on fisheries in Mexico demonstrated, he says, the utility of “working on real, on-the-ground environmental problems and seeing what the major challenges are and what the different stakeholders have to say.” He served as a visiting attorney at Earthjustice in Washington, D.C., after receiving his SJD, prior to joining ELI.

“D.C. is the perfect place for this kind of work, and for the kinds of things I want to continue to observe and learn about,” he says. “With its combination of international and domestic NGOs, think-tanks, government agencies, and financial institutions like the World Bank, I think that it’s the place to be if you really want to be up-to-date on ocean conservation policy.”

Still, Recio-Blanco and his wife miss Durham — “everything from the cost of living, to the fact that I could ride a bike,” he says. “After spending two-hours every day in traffic in Mexico City, I didn’t even have a car for my first year in Durham! We always felt a kindness and warm-heartedness from people. And my son was born at Duke Hospital, so I am forever attached to Durham.”