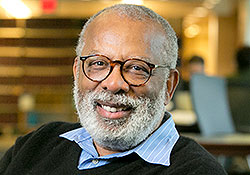 The U.S. Court of Appeals for the Fourth Circuit has granted a Wrongful Convictions Clinic client’s request for a full federal court hearing in federal court on the merits of his constitutional claims following oral arguments made by Professor James Coleman Jr. in November.

The Fourth Circuit issued its ruling on behalf of clinic client Charles Ray Finch on Jan. 25. Finch, who is now 80 years old, has maintained that he did not commit the murder in Black Creek, N.C., for which he was convicted and incarcerated in 1976. The clinic appealed to the Fourth Circuit on his behalf after the U.S. District Court for the Eastern District of North Carolina denied his habeas petition in 2016 on the grounds that it was barred by the one-year federal statute of limitations.

“Because the present record meets the exacting standard for the actual innocence gateway to consideration of a constitutional claim, we reverse the district court’s decision and remand the petition for adjudication on the merits,” wrote Fourth Circuit Chief Judge Roger Gregory in an opinion joined by Judges Barbara Keenan and Henry Floyd.

“Ray was elated to hear the news — he wanted to know when he would get out,” said Coleman, the John S. Bradway Professor of the Practice of Law and Wrongful Convictions Clinic co-director, who first interviewed Finch on his claims of innocence in 2001. “I started writing state officials in 2002 and 2003. Over the years, we wrote letters to every major elected state official. None showed any interest.”

The district court dismissed Finch’s habeas petition, which the clinic filed on his behalf in 2015, without ruling on its merits, finding both that it was time-barred by the Antiterrorism and Effective Death Penalty Act of 1996 (AEDPA) and that he failed to meet the actual innocence standard required to overcome the time barrier. The circuit court rejected that finding, with Judge Gregory writing that “Finch alleges actual innocence which, if proven, serves as a gateway through which a habeas petitioner may pass when AEDPA’s statute of limitations has expired.” He cited earlier jurisprudence for the rule’s grounding in the “‘equitable discretion of habeas courts to see that federal constitutional errors do not result in the incarceration of innocent persons.’”

To reach its verdict, the court extensively reviewed the evidence and testimony at Finch’s 1976 trial for the murder of convenience store owner Richard Holloman in the course of a robbery, noting problems relating to eyewitness testimony and line-up procedures. The court also took note of evidence proffered after Finch’s trial that cast further doubt on the eyewitness testimony, police interrogation tactics, and the physical evidence, as well as the testimony of an expert presented by the clinic in a 2013 evidentiary hearing, that “called into question Finch’s culpability based on an unduly suggestive pretrial line-up” that increased the risk of misidentification.

The opinion indicated that the judges found the new expert evidence relating to improper line-up procedures particularly persuasive in supporting Finch’s allegations that his rights under the Due Process Clause of the 14th Amendment were violated and that he was misidentified by the state’s eyewitness. “No reasonable juror would likely find Finch guilty beyond a reasonable doubt if it knew the high likelihood he was misidentified [by the key eyewitness] both outside and inside the courtroom as a murder suspect because of impermissibly suggestive procedures,” Judge Gregory wrote.

The court determined that Finch had satisfied the “exacting standard” of demonstrating that properly instructed, reasonable jurors would, “more likely than not,” find him not guilty based on the totality of the evidence now available, and that his continued incarceration would constitute a miscarriage of justice unless the merits of his constitutional claims were decided. In analyzing the evidence on record, the court took note of the lack of any physical evidence implicating Finch and new medical and ballistic evidence indicating that the murder weapon, a pistol, was misidentified as a shotgun, a fact that both undermined the eyewitness testimony that Finch fired the fatal shot — critical to the first-degree murder conviction — or was even at the murder scene, required for a felony-murder conviction. “Criminal liability, under any theory, including the felony-murder rule, would not attach to Finch if there is no evidence that he was at Holloman’s store during the murder,” Judge Gregory wrote.

“The Fourth Circuit’s opinion is strong enough that it is unlikely the state could overcome our claims on the merits,” said Coleman, who directs the Duke Center for Criminal Justice and Professional Responsibility. “One claim is that the line-ups were unconstitutional. On remand the state would have to show by clear and convincing evidence that the eyewitness identification was independent of the line-ups and otherwise reliable.” The Fourth Circuit’s conclusion that the record as a whole was insufficient to convict Finch makes such a showing inconceivable.

The clinic will ask N.C. Attorney General Josh Stein to join a motion in the district court to grant the habeas petition, he said. “I hope we can quickly wrap up what remains.”

Professor Nita Farahany ’04, who researches and writes extensively on matters at the intersection of science and criminal law, co-authored the brief the clinic filed with the Fourth Circuit with Eileen Ulate ’19 and Sarah Milkovich ’19 and attended the oral arguments held in Cherokee, N.C., along with a contingent of clinic students and faculty and members of Finch’s family.  Farahany also worked on the case as a student at the Law School.