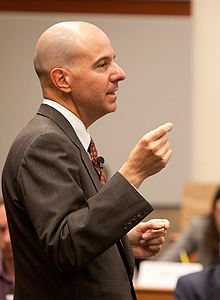 David Kappos, Undersecretary of Commerce for Intellectual Property and Director of the United States Patent and Trademark Office (USPTO), delivered the 10th annual Meredith and Kip Frey Lecture in Intellectual Property at Duke Law School on Oct. 18. Kappos, who advises the Obama administration on IP policy, spoke about the America Invents Act (AIA), a sweeping patent-reform bill signed into law in September.

A key architect of the law, Kappos stressed the AIA’s potential for positive impact on the economy, saying it would enable innovation and lead to job creation. “By building the world’s first and only 21st century patent system, fit to manage the demands of a globalized economy, this new law enables a better-resourced USPTO to grant IP rights with greater speed, greater clarity, and greater quality,” he said. “It also significantly advances the president’s strategy of deploying American innovation to build businesses and to build jobs for our country.”

Before being nominated to his position by President Barack Obama in 2009, Kappos served as Vice President and Assistant General Counsel for Intellectual Property at IBM, where he directed IBM’s worldwide intellectual property operations. As USPTO director, Kappos said his priority has been to develop policies and procedures to speed up the patent review process and reduce a significant patent application backlog.

Kappos outlined key provisions of the AIA and their impact on USPTO operations, patent quality and innovation. He addressed the new tools and initiatives the office is implementing to make navigating the patent system easier for practitioners and commented on procedural changes patent holders and counsel can expect with respect to patent litigation and disputes.

Patent reform was necessitated by the fundamental importance of patent rights to the national economy and the rapid pace of technological growth, Kappos said.

“We’re bearing witness to this awe-inspiring progress of technology at a pace never before seen by any previous generation, and … protecting technologies with clear, consistent, and dependable patent rights is absolutely fundamental to disseminating scientific advances and affording society the opportunity to build from one new discovery to another. … The AIA is an historic piece of legislation for our country, because in the centuries since that first patent examiner, Thomas Jefferson, who viewed and granted US patents, our nation has observed sweeping revolutions in the pace of innovation but no concomitant, comprehensive legislative adjustment to patent policy.”

The AIA speeds up the patent process by streamlining the application process, switching from a “first-to-invent” to a “first-to-file” system for granting patents, improving the mechanisms for keeping patent challenges out of the courts, and changing the way the USPTO sets fees, among other changes. 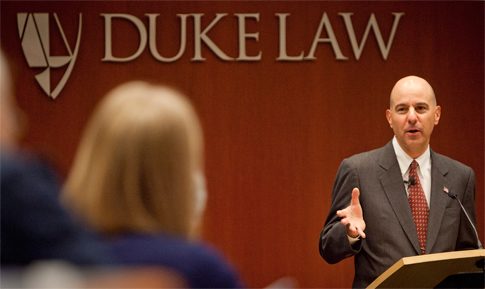 “We believe that by cutting costs for independent inventors and entrepreneurs, and issuing patents that obviate expensive court challenges by providing tools that enable us to reach patent decisions three times faster than in the past, the new law absolutely topples many existing structural impediments to business and technological growth for our country,” Kappos said.

Eliminating an unwieldy process and a massive patent application backlog could help lure investors at a time when American businesses badly need them, he said. “With this greater efficiency built into the new American IP system, investors will have greater confidence in the American patent, and as you all know, for investors, patent right is a strong indicator of the potential of a new enterprise. For inventors, the other guys involved in this process, patents are essential to attracting capital to develop their product.”

Kappos was introduced to the overflow audience of students, faculty, alumni, and practitioners by Duke’s Elvin R. Latty Professor of Law, Arti Rai, a scholar of patent and biotechnology law who served as Administrator of the Office of External Affairs at the USPTO in 2009 and 2010.

The Meredith and Kip Frey Lecture in Intellectual Property was established by Duke Law alumnus Kip Frey '85 and his wife, Meredith, to increase discussion about emerging issues in the areas of intellectual property, cyberspace, and science and technology law. An entrepreneur and venture capitalist, Kip Frey is president and CEO of EvoApp, a technology solutions provider helping businesses to strengthen customer relationships through social media business intelligence services. A visiting professor of the practice of law at Duke, he directs the Law School’s Law and Entrepreneurship Program.