The House That Jack Built

Elvin “Jack” Latty, Dean of Duke law School from 1957 to 1966, would begin his first year Contracts class with a rubber band stretched across both his hands. As a student’s line of reasoning grew tenuous, so would the rubber band, both attenuations accompanied by Dean Latty’s characteristic “Well…”. every Duke Law student came to know the snapping sound of broken logic. Lanty Smith ’67 remembers one of his classmates walking into class with a fist full of rubber bands, exclaiming that he was “tired of playing defense.”


Latty was a character. He is revered as a teacher, a scholar, and a legal draftsman. But the story of Jack Latty, from his ambitious recruitment of the strongest students and faculty to his bringing about the physical rebirth of the previously moribund law school, is a story first and foremost of personality. As his successor in the deanship F. Hodge O’Neal wrote, “Duke University School of Law owes its prominence more to Jack Latty than to any other person or combination of persons.” 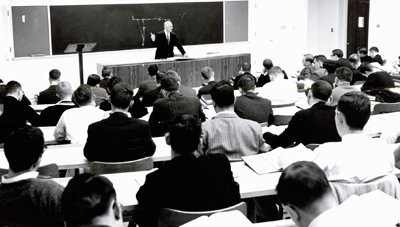 In his first year as dean, the Law School received only 15 applications for admission. at the time, Duke Law was struggling to attract a geographically diverse student body in order to achieve a national presence. At the same time, its relatively high tuition rates deterred local applicants who had a number of state schools to choose from.


Latty embarked on a whirlwind student recruitment campaign and mustered a full class in his first year. His continued successes in attracting the highest caliber of faculty and students were, lightly put, unorthodox. Smith had already been offered scholarships at Harvard and Penn law schools when Latty tracked him down at Wittenberg University, in Ohio. He agreed to a last minute interview with the dean who told him he was “precisely the kind of student” Duke needed — but the school had committed the last full scholarship. with a terse “good luck,” Latty concluded the interview and left Smith in sudden disappointment.


Smith’s newfound desire to attend Duke grew until the following monday when a telegram from Latty arrived announcing, “‘I now have a great scholarship.’ He played me,” Smith happily concedes.


O’Neal, Latty’s successor as dean, wrote of the day he received a startling phone call from another university: “Keep Jack away. Don’t let him set foot on this campus again!” Latty, who continued
to recruit for Duke Law, had taken a look at the records of the students at the other school, thrown the files back on the placement director’s desk, and exclaimed for everyone to hear, “None of these students are good enough to get into Duke Law School.”


Latty displayed the same vigor in placing his graduates as he did in selecting them for admission. He once faced the hapless task of writing a letter of recommendation for the “anchor man” — the person at the very bottom of the class. Despite the young man’s aversion to preparing for or even attending classes, latty put the student’s scant achievements in the best possible light and concluded, “Sir, you will be lucky if you can get this young man to work for you.”


Ultimately, the dean’s methods were unconventional but effective. Under his influence and direction, Duke Law School rose to the front rank of legal academia, the first African American students joined the class of 1961, and, at a dedication ceremony presided over by Chief Justice Earl Warren, the law school opened its new home at Towerview Road and Science Drive; Latty had somehow convinced the university to move the law school from the very bottom to the top of the capital improvement schedule.


Right beside his maverick fervor, Latty maintained an avuncular modesty. Nat Pieper ’67 recalls stopping by Duke on the way home from a long road trip prior to starting law school. Pieper was dismayed to find the law school entrance locked. He noticed a whitehaired man in spackled overalls carrying a brush and can of paint and asked the man if he thought “they would mind if I took a look around since I’ll be going here next fall.” the man smiled, replied “I don’t think they’ll mind at all,” and proceeded to give a tour. the painter was, of course, Dean latty.


Fittingly, during the Law School’s building dedication in 1963, the Board of trustees referred to the new facility as “the house that Jack built.” In many ways, it still is. 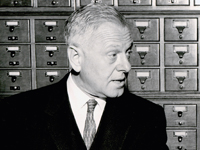 A number of alumni recalled Latty as a forceful (often unorthodox) recruiter of the best and brightest students, an excellent teacher, and a caring mentor who took a keen interest in placing Duke Law graduates in positions at top law firms.