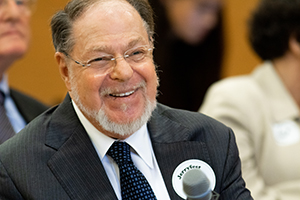 Leading academics and policymakers from around the world, many of them his research partners and co-authors and editors, convened in Cambridge on Sept. 26 and 27 for “Innovation, Justice, and Globalization — A Celebration of J. H. Reichman.” The theme for the conference and its programming reflected the innovative and influential nature of Reichman’s scholarship, which has long focused on legal and policy strategies to resolve challenges arising from the grant of exclusive property rights foundational to intellectual property law, such as access to patent-protected essential medicines in developing countries.

“What emerged was a mosaic of contributions to different fields — patent, copyright, trademarks, domestic and international law, commons governance regimes — in which Jerry has managed to flesh out foundational principles, address difficult conceptual and practical problems, and propose normative and policy solutions that all of us, from scholars to policymakers, borrow from, learn from, and build on — and will continue to do so for decades to come,” said Ana Santos Rutschman LLM ’08, SJD ’16, assistant professor at St. Louis University School of Law where she is affiliated with the Center for Health Law Studies, who addressed Reichman’s work on biopharmaceutical innovation.

“From the standpoint of international intellectual property, he is one of the leading figures in all of these areas,” said Elvin R. Latty Professor of Law Arti Rai, who addressed Reichman’s work relating to patent disclosure and trade secrecy. “It was a very wide-ranging conference, and I think that’s a tribute to his wide-ranging intellect in the areas he’s written in over the years.”

Reichman’s 10 books include: Governing Digitally Integrated Genetic Resources, Data, and Literature: Global Intellectual Property Strategies for a Redesigned Microbial Research Commons (Cambridge University Press, 2016, with Paul F. Uhlir and Tom Dedeurwaerdere), which examines how scientists share collections of microbes and related data to advance research in such areas as medicine, agriculture, and climate change, and how current systems for facilitating that transnational exchange can — and should — be improved; and International Public Goods and Transfer of Technology Under a Globalized Intellectual Property Regime (Cambridge University Press, 2005, editor with Keith Maskus), which emerged from his work addressing the problems that developing countries face in implementing TRIPS.

Keynote addresses at the conference were delivered by Judge Guido Calabresi, of the U.S. Court of Appeals for the Second Circuit, and Yochai Benkler, the Berkman Professor of Entrepreneurial Legal Studies at Harvard Law.

The conference, dubbed “Jerryfest” by participants and organized as a surprise for Reichman, also celebrated his kindness and generosity towards students and fellow scholars alike, as well as his appreciation of good food and wine, acquired, in part, during the 20 years he lived in Italy prior to entering the legal academy.

“I’ve written three articles with Jerry,” said Rai. “Each of them was just a delightful experience, but the most delightful was the one that we almost entirely co-wrote over a series of many, many weekends when we sat with our co-author in Jerry’s house, surrounded by good food and wine. We really did it line-by-line with a third colleague, and that was just extraordinary.” Rai added that the unusual process proved to be exceptionally coherent; the resulting article, “Pathways Across the Valley of Death: Novel Intellectual Property Strategies for Accelerated Drug Discovery,” 8 Yale Journal of Health Policy, Law & Ethics 53-89 (2008) (reprinted in Gene Patents and Collaborative Licensing Models: Patent Pools, Clearinghouses, Open Source Models and Liability Regimes 247-287 (Geertrui Van Overwalle ed., 2009)), was co-written with Paul Uhlir, also a conference presenter, and Colin Crossman ’03.

Said Santos Rutschman of her SJD advisor, for whom she also served as teaching and research assistant: “Every single speaker at the conference remarked on how generous a colleague and mentor Jerry has always been. I share 100% in that view, but I would also like to say that that Jerry’s generosity extends well beyond work — or better, that there is no divide between Jerry the scholar and Jerry the person. I’ve gone to him countless times for advice, support, companionship, Thanksgiving meals (and of course Italian wine), and his door has always been open for me, literally and figuratively. I have learned how to become a scholar by studying with Jerry. But he has also taught me what it means to be an engaged citizen and a good friend.”

Reichman was lured to Cambridge by an invitation to a fake academic conference (complete with mock agenda) and a very real request to guest lecture on Sept. 25 in a course taught by Ruth Okediji, Harvard’s Jeremiah Smith, Jr. Professor of Law and a principal Jerryfest organizer. Expressing his gratitude to her and to fellow organizers Justin Hughes, the William H. Hannon Professor of Law at Loyola Law School, Los Angeles, and Professor Irene Calboli of Texas A&M University School of Law, Reichman described the gathering of scholars, colleagues, and friends in his honor as “overwhelming” and touching on many levels. He was particularly gratified, he said, to note the many citations and references presenters made in their papers to his body of work on access to medicines and how the flexibilities of the TRIPS agreement can be used to facilitate better pharmaceutical pricing in developing countries.

Collectively, the papers presented at the conference represented a significant “contribution to knowledge,” that was personally edifying, he said. “I learned something from each one.