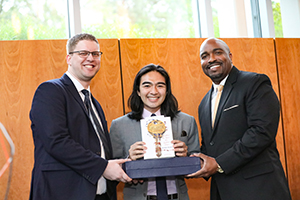 Duchoang "Dan" Pham JD/LLM ’19 has been awarded a 2019 Equal Justice Works Fellowship, one of the most prestigious and competitive post-graduate legal fellowships in the country for aspiring public interest lawyers.

Pham will spend the next two years helping the Equal Justice Center establish its first legal aid office in Houston, home to a diverse immigrant population. Sponsored by the Texas Access to Justice Foundation, he will specialize in employment law assistance for immigrant and low-wage working men and women regardless of their immigration status.

“Houston is on the front lines of fighting for immigrant rights, and is a top spot for human and labor trafficking,” Pham said. “It’s a great place to work on the issues I care about.”

It’s also a familiar city. The son of Vietnamese refugees, Pham spent part of his childhood in Houston, which has one of the nation’s largest Vietnamese-American communities. His parent’s vivid bedtime stories about their flight from Saigon after the city fell to North Vietnam in 1975 inspired an interest in history that he pursued as his undergraduate major at Yale and laid the groundwork for his interest in the ways law impacts people in immigrant communities.

“That sense of history was there in my family life and ultimately had a lot of influence on the type of legal work I wanted to do,” Pham said.

Pham has been highly committed to public interest at Duke; he received the Law School’s Public Interest and Public Service (PIPS) Certificate at graduation along with his JD and LLM in international and comparative law. He also received a Faculty Award for pro bono service.

Indeed, Pham continually sought out opportunities to work on immigration law and immigrants’ rights and to serve clients directly. After his first year he interned at the Houston Immigration Court under the Department of Justice’s Executive Office of Immigration Review, gaining an understanding of the policy issues behind offering asylum and other forms of relief from removal and drafting opinions on motions to reopen, cancellations of removal, and asylum applications.

In addition to enrolling in the Civil Justice and International Human Rights clinics, Pham both planned and led a spring break trip to the University of Miami Immigration Clinic where his team interviewed and prepared asylum applications for clients in immigration detention centers who often had been traumatized by their experiences.

“Our work with the Miami Clinic taught me the importance of patience and compassion when communicating with clients,” Pham said. “Many of our clients had suffered persecution, both at the hands of militants during the Somali Civil War and of ICE agents upon contact with the U.S. immigration system.”

Pham served as research assistant to Kerry Abrams, the James B. Duke and Benjamin N. Duke Dean of the School of Law, who is a scholar of immigration law. He also helped lead the Duke Immigrant and Refugee Project (DIRP) in providing pro bono support for immigration nonprofits on issues from asylum claims to landlord-tenant problems faced by resettled refugees. His work facilitated connections between local organizations and the Law School, which is launching an Immigration Clinic that will collaborate with DIRP on a pilot project next fall.

Last summer Pham worked in the Equal Justice Center’s Austin, Texas, office. Working on a team that represented Filipino and Cambodian victims of human trafficking, Pham said he gained a deeper understanding of how immigration status affects workers’ rights, and how some employers attempt to intimidate undocumented workers or exploit the U.S. visa system to procure forced labor from trafficking victims.

As an Equal Justice Works fellow, Pham will work on issues involving both federal and state law, including claims of unfair labor practice, employment discrimination, and labor trafficking.

“We’re going to be the pioneering lawyers doing this work in Houston,” said Pham, calling it a “morally unambiguous” area of law.

“Regardless of where you lean on immigration, I think most people believe that if you work, you’re supposed to get paid for it. Otherwise, how are you going to live?”

Pham will also seek to build trust with members of immigrant communities and partnering agencies as the EJC, which has been branching out around Texas, enters the state’s largest and most diverse city.

Pham’s classmates honored him with the Justin Miller Award for integrity at their Graduation Gala on May 9; the Integrity Award honors “courageous” individuals of strong principles and solid and altruistic characters who demonstrate appreciation for honesty and justice and the ability to instill those qualities in others.

Presenter Matt Eible ’19 said Pham had played an “outsized role” in the Duke Law community and described him as “a tireless worker, always optimistic. He maintains a positive attitude regardless of the stress that he faces and never loses sight of what is most important in obtaining justice or helping those most in need.”