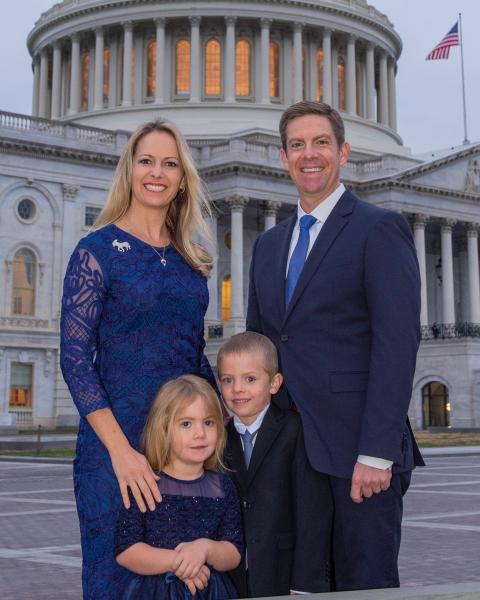 Rep. Mike Levin was joined on Capitol Hill by his wife, Chrissy, and their children, Elizabeth and Jonathan, when he was sworn into office on Jan. 3.

Mike Levin was sworn in to his freshman term in the U.S. House of Representatives in the midst of the longest federal government shutdown in history. The central issue — a proposed wall on the U.S. Mexico border — hits particularly close to home for him. Not only is his district, California’s 49th, just an hour away from the border, but his grandparents were Mexican immigrants.

“They made sacrifices and risked everything to come to this country and seek better opportunities for their children and grandchildren,” Levin said in an interview during the shutdown. “I’m extremely hopeful that both parties can come together around a comprehensive immigration policy that is focused on security and humanity. That’s the America I know from my own family history.”

Immigration is just one of many significant issues Levin, a Democrat, is tackling as part of the youngest and most diverse freshman class in congressional history. His district stretches from southern Orange County to northern San Diego County, encompassing more than 50 miles of coastline. A former environmental attorney, he built a career in clean energy and ran on a progressive platform focusing on climate change that won over enough independent voters to flip a district that was represented by Republican Darrell Issa for 16 years. Levin won the seat by 13 points.

Since being sworn in on Jan. 3, Levin has sponsored or supported bills on a wide range of issues: raising the federal minimum wage, creating gender pay parity, strengthening Social Security, mandating background checks for gun purchases, and bringing more federal funding to California for wildfire recovery and prevention. And he introduced two bills to ban offshore oil and gas leasing along the California coast.

“I was not elected to be a wallflower or to fail to take a stand on the important issues of the day,” Levin says. “As a member of the progressive caucus, I think that it is important that we are bold and not afraid to stand up for our values, whether it’s on social justice or economic justice or environmental justice.”

In Washington, Levin is emerging as a leading voice on climate change — his signature issue — with appointments to the House Natural Resources Committee and the new House Select Committee on the Climate Crisis. On the latter committee he is one of three Democrats who signed a resolution supporting a “Green New Deal” that aims to curtail fossil fuel consumption by supporting further development of the clean energy industry. In California, the solar energy industry alone employs 87,000 people, he points out.

“Our solar energy industry in California is now larger than the coal industry in the entire U.S. because we’ve doubled down on innovation, research, development, and deployment of next-generation clean energy technology,” Levin says. “The myth is that if you protect the environment, you cannot also grow the economy — that it’s one or the other, and that is simply a false choice.

“Either we are going to lead in inventing and deploying the clean energy technologies of the future that will be used the world over, or we will be using technologies that are invented and developed elsewhere. So why not lead?”

Except for his three years at Duke Law, Levin has spent his life and career in California, where he remembers growing up with chronically smoggy air. He became politically active as an undergraduate at Stanford University, where he majored in political science and was elected student body president in his junior year. His interests and future career in environmental law started to take shape at Duke, where he read widely on climate change and was involved in the Duke Environmental Law & Policy Forum.

“I think everyone needs to know their purpose and needs to figure out how they want to best make their mark,” he says. “Certainly, my passion for the environment stems from being raised in Southern California where we had significant air quality issues growing up and wanting to protect our beach and our coast. Then I went off to a very environmentally conscious undergraduate school and law school. All of it had an additive impact that led to the career I chose, and ultimately the issues that I ran on and now hope to serve on as a member of Congress.”

The 2016 election catalyzed his run for office. Levin had served on the National Finance Committee for Hillary Clinton’s presidential campaign and was in the New York ballroom on election night where she conceded defeat. After the post-inauguration Women’s March on Washington, Levin says he and his wife, Chrissy, who have two young children, decided together that it was the right time for him to seek national office.

Levin ran a grassroots campaign that did not accept funding from corporate political action committees and focused on climate change and creating green jobs through investment in science, engineering, biotechnology, and research. It’s a message, he says, that resonates in Southern California, where residents have endured droughts and frequent wildfires in recent years. California has the largest ocean-based economy in the nation, and the 49th District is home to two large scientific research institutions: UC San Diego and the Scripps Institute of Oceanography.

“We’ve got some of the best climatologists in the world studying these issues right here in our district,” Levin says. “They will tell you that if we don’t take bold and dramatic action in the coming decade to reduce our greenhouse gas footprint, we aren’t going to get another chance to prevent significant harm — not only to our environment but also to our economy.”

Levin received endorsements from former President Barack Obama and many progressive and labor organizations. His Duke network also was an important asset, providing get-out-the-vote support as well as financial backing. His California friends and allies include Scott Peters T’80, a fellow Democrat who represents the adjoining 52nd District that includes the rest of San Diego County.

“I was really blown away by all the support I received from not just my classmates but the Duke community at large,” Levin says. “And now we have two Congress members with Duke backgrounds representing Greater San Diego.”

In addition to his two environmentally oriented committee appointments, Levin also serves on the Committee on Veterans’ Affairs; his district includes Camp Pendleton, a 200-square-mile Marine base, and 77,000 military veterans live within a 50-mile radius. He holds monthly town hall meetings with his constituents where he has discussed his support for a “Medicare-for-all” bill and plans to organize a task force to address storage for millions of pounds of waste from the closed San Onofre nuclear plant.

Despite the partisan divide in Washington, Levin is optimistic that Republicans and Democrats can come to agreement on shared concerns. He is certain that many of his GOP colleagues agree with scientific consensus on climate change and will view attempts to curb it as being in their constituents’ interests. And he likes to note that the Environmental Protection Agency was created by executive order of a Republican — fellow Duke law alum Richard Nixon ’37.

“I always remind people of all the good environmental work that Republicans used to do,” Levin says. “The EPA was created on Nixon’s watch, not as a front for big polluters but rather to protect our environment, our air, our water, our natural resources, and also to put in place health and safety protections against pesticides and other toxins that ultimately benefit everyone.”

Levin notes that his political destiny must have been apparent to his classmates at Duke: Even though he never ran for office at Duke Law, a student publication called him “most likely to become president.” But a future run for higher office depends on his family’s consent, he says.

“My wife and two young kids are making an incredible sacrifice for their husband and father to be on the road 135 days a year,” Levin says. “I’m extremely mindful of my family always needing to come before any political ambition, and for me that is non-negotiable. My only interest right now is serving the residents of the 49th District well.” — Jeannie Naujeck