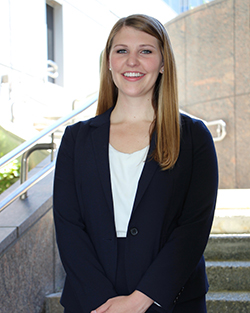 Her path to the law began with an interest in social policy. During college at Rice University in Houston, George worked in early education, community redevelopment, and affordable housing. Then, after graduation, she served as a legal intern at Houston’s Texas Defender Service, which represents prisoners on Texas’s death row in post-conviction proceedings.

“That’s what convinced me to go to law school,” George said. “I saw the great work they were doing and I realized how big an impact lawyers can make. I’m interested in policy, so I’m looking forward to getting a lot of good litigation experience and seeing where that takes me.”

At Duke, George earned a Public Interest and Public Service (PIPS) Certificate along with her JD, in part by interning during summer 2017 at the U.S. Department of Justice’s Civil Rights Division in Washington, D.C., and logging 170 hours of service during a semester-long externship at the Durham Expunction & Restoration Program (DEAR).

Based in the Durham County Courthouse, DEAR’s legal team consists of attorneys from the City of Durham, Legal Aid of North Carolina, and the North Carolina Justice Center who work with the Durham District Attorney’s Office to resolve old traffic charges for Durham residents whose licenses have been suspended.

George says she was struck by the number of Durham residents who were forced to choose between risking more tickets and additional fines every time they drove to work, school, or ran an errand, and finding other means of transportation. And she found their licenses had often been suspended for minor offenses. One client, for example, had her license automatically suspended when she couldn’t pay a $200 fine and court fees to satisfy a ticket for driving five miles above the speed limit.

“I presented the motion to the judge and we were able to get my client’s court costs remitted,” George said. “Later she called me and said she was able to get her license back and she could finally drive to work and drive her child around.”

That case had a gratifying outcome but George knows that many more need similar help.

“So many clients came in and said, ‘I’m just stuck,’” she said. “We had so many people come in and say the same things – that they are taking care of their family and they need to go to work and they’ve never done anything dangerous, they just haven’t had the money to pay.

“Suspension just seems so punitive for such a small crime, if you can even call it that.”

George names Brandon Garrett, the L. Neil Williams, Jr. Professor of Law, as a favorite professor, having taken both his Criminal Justice Policy course and Forensic Science Colloquium. “He’s been really great at encouraging us to look at problematic areas of the law like driver license suspensions and cash bail and figure out how we can take what we are learning in class and make a practical change in Durham and North Carolina,” she said. She particularly admires the research and law reform efforts on automatic license suspensions in North Carolina Garrett has conducted through his JustScience Lab at Duke Law.

“Every time I meet someone in Durham who’s doing something really great for the community, they know Professor Garrett,” said George.

She also cites Kate Bartlett, the A. Kenneth Pye Professor of Law, as a trusted advisor. Bartlett served as George’s faculty mentor for the PIPS Certificate.

“I enjoyed her Gender and the Law class but I also feel that I could trust her if I ever had any issues or was trying to figure out what to do with my career,” George said. “She’s someone I could go to and get really good advice.”

Before visiting Duke Law, George had already committed to another T14 law school. But one trip to campus changed her mind.

“When I visited, it felt like a small community where people knew each other and I saw a lot of professors interacting with students in a way that just felt very collegial,” George said.

"I wanted to be in an environment where I felt supported by the people around me. Law school is a tough place sometimes, academics-wise and stress-wise, but if you’re going to do it, I feel like Duke is one of the best places.”