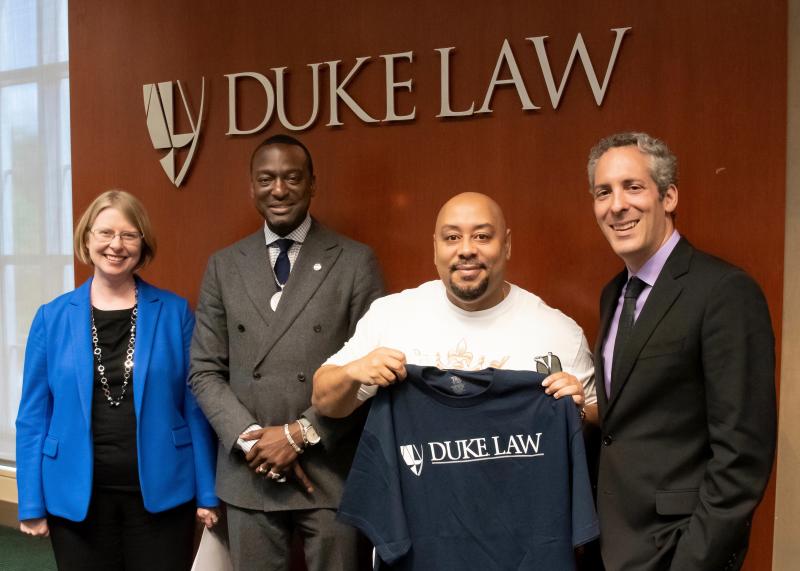 Yusef Salaam and Raymond Santana asked Duke Law students to remember the story of the Exonerated Five as they begin their careers, and said that speaking to future members of the legal profession has helped them heal the emotional trauma from their case.

“There’s not a day that goes by that we don’t think about this situation,” Santana said to an overflow audience of students and community members at the Law School on Sept. 3. “It’s constantly on our minds. But we know we have a service to fulfill. We have an obligation to tell you what happened to us. … We just want you to do your job to the best of your ability. Don’t cheat. Don’t cut corners.”

As teenagers, Salaam and Santana were wrongfully charged and convicted, along with three others, of the brutal rape of a jogger in New York City’s Central Park. They were interviewed at Duke Law by L. Neil Williams, Jr. Professor of Law Brandon Garrett, a leading scholar of criminal procedure, scientific evidence and wrongful convictions, who, early in his career, helped represent Salaam in his quest for exoneration. The event marked the launch of the Law School’s new interdisciplinary Center for Science and Justice, led by Garrett, that will apply legal and scientific research to reforming the criminal justice system.

Salaam, Santana, Korey Wise, Antron McCray, and Kevin Richardson were between ages 14 and 16 in 1989 when they were arrested for allegedly raping and beating the 28-year-old jogger. Subsequently, the convictions of the so-called “Central Park Five” were vacated in 2002 after another man whose DNA matched DNA from the scene confessed to the assault and rape. In June 2014 the men settled a civil suit with the City of New York. Since then, they have become advocates for criminal justice reform and were the subjects of the Netflix series “When They See Us,” released earlier this year.

“When you go into the system at a very young age it turns you into a fighter,” Santana said. “We’ve been fighting for so long, and we don’t know when it’s time to hang up the gloves.”

Said Salaam: “We’ve been given the opportunity to turn up our lights. We are trying to break generational curses by what we are doing with our lives.”

Recounting the circumstances of their convictions, Santana and Salaam said the young teenagers confessed to the crimes under pressure by seasoned police officers using the Reid technique, a nine-step process of interrogation that includes direct confrontation and offering alternative theories of the crime to elicit an emotional response from which guilt may be inferred. The Reid technique has since been discredited for eliciting a high number of false confessions, especially among juveniles. Santana called the situation an “unlevel playing field” and said the teens naively believed they would be released once the facts of the case emerged, including the fact that no blood from the victim was found on any of the accused men.

But the teens were vilified by prosecutors and the media in the ensuing weeks, especially after Donald Trump took out a full-page ad in four New York City newspapers calling for the return of the death penalty shortly after their arrests. “The effect of false confessions is what allowed a lynch mob to form,” Salaam said, holding up a copy of the ad.

Salaam and Santana, ages 15 and 14 respectively at the time of their arrest, were sentenced as juveniles to five to 10 years in detention and served more than six years each before their sentences were vacated in 2002. After their exonerations the men faced struggles, Salaam said, including emotional trauma and financial hardship. Few employers would consider hiring them because of the case's notoriety and 11 years passed until New York City settled their civil lawsuit, with each man receiving about $1 million per year incarcerated.

Since then, Salaam said, their financial independence has allowed them to travel the country, speaking in public and fighting against, as Salaam called it, “the criminal system of injustice.”

“‘When you are free from your immediate task, still labor hard,’” Salaam said, translating a verse from the Quran. “I often describe being in the belly of the beast as an awakening process for me. I was being made courageous; I was being made brave. I was being shaped and formed, unbeknownst to me, to provide a service 30 years later.”

The conversation with Santana and Salaam, who also spoke at Duke’s Page Auditorium on Sept. 2, was sponsored at Duke Law by the Dean’s Office, the Center for Criminal Justice and Professional Responsibility, the Duke Law Innocence Project®, and the Criminal Law Society. Clinical Professor Jamie Lau ’09, supervising attorney in the Wrongful Convictions Clinic, helped organize the event.

In her welcoming remarks, Kerry Abrams, the James B. Duke and Benjamin N. Duke Dean of the School of Law and professor of law, highlighted the engagement of Duke Law faculty scholars and students in pursuing justice for wrongfully convicted individuals and in criminal law reform.

“Wrongful convictions are an all too well-known phenomenon and Duke Law School has been on the forefront for years in doing the difficult and often painstaking work it takes to right these wrongs,” Abrams said.

In 1991, she noted, James E. Coleman, the John S. Bradway Professor of the Practice of Law, developed the first law school-based death penalty clinic in the nation. In 2006 he turned its focus to investigating claims of innocence made by incarcerated felons, establishing the Wrongful Convictions Clinic which Coleman co-directs with Charles S. Rhyne Clinical Professor of Law Theresa Newman ’88. This summer, the clinic won its seventh and eighth exonerations with the releases of Charles Ray Finch and Dontae Sharpe, who were incarcerated for 43 and 25 years respectively.

Abrams called Duke Law “the leader in criminal justice research nationwide,” citing scholarship by Charles L. B. Lowndes Professor of Law Sara Sun Beale on prosecutorial discretion; Candace M. Carroll and Leonard B. Simon Professor of Law Lisa Kern Griffin on the relationship between narrative and factual accuracy in the courtroom; Bernard M. Fishman Professor of Law Samuel W. Buell on the conceptual structure of white collar offenses; Professor of Law and Professor of Philosophy Nita Farahany on the ethical dimensions of emerging technologies in criminal law; and Associate Professor of Law Ben Grunwald on the movement of convicted officers within the law enforcement labor market.

The Duke Center for Science and Justice, which is supported by a $4.7 million grant from the Charles Koch Foundation, will build on and enhance this record, she said, in its focus on accuracy of evidence in criminal cases; the role of risk in criminal outcomes; and addressing a person’s treatment needs as an alternative to arrest and incarceration. It will also examine the needs of formerly incarcerated persons who are re-entering society.

“At Duke Law School, we are building on our deep strengths in criminal law to create new opportunities for students and faculty to take the lead in studying and shaping approaches to criminal justice reform,” Abrams said. “The Center for Science and Justice will be an integral part of educating students who aspire to make the criminal justice system of the future better and fairer for everyone.”

Video of the full event is at https://www.youtube.com/watch?v=mPpr3zhh6QQ&feature=youtu.be