“He got a letter to Mrs. Jon Byers, because they obviously thought Joan was a misprint, that Mrs. Jon Byers was invited to join the Law Dames,” Erwin ’74 recalled during an interview for the Law School’s Oral History Project.

Founded in the early 1950s, the Law Dames’ purpose, as outlined in its 1955- 1956 constitution, was to “promote the social fellowship of its members and to assist in obtaining all the benefits to be derived from living in this university center.” At its peak the group had approximately 80 paying members. Dues started at a dollar per semester and increased to $3.50 annually by the early 1970s.

The Law Dames met twice per month during the academic year, with meetings that alternated between guest speakers and leisure activities like playing bridge. They also hosted a series of annual events — a Christmas party, a fashion show, and an end-of-the-year family picnic at Forest Hills Park — and participated in a variety of community service activities. 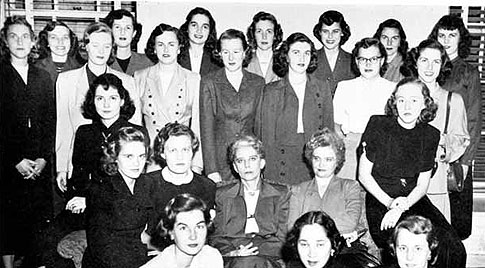 Dean Elvin Latty was traditionally the group’s first guest speaker each year during his tenure at Duke (1957–1966). Latty’s 1959 remarks reflected on the rigors of Law School life for students and spouses alike: “You are probably thinking there must be an easier way, but there’s not much of an easier way — not at a really good law school.”

That same year the group made its collective voice heard in response to a ban on women using the library.

“We passed a resolution at our general meeting and presented it to the faculty expressing our feelings concerning the new library resolution that no woman be allowed in the library,” Jeannie Bader wrote in the 1965-1966 President’s Report. “This library resolution, although I am sure not solely because of our resolution, was later changed.”

The Law Dames raised their voices again in 1972, but in a different context. They reflected on the trials and tribulations of life in a quirky small town as part of a musical tribute called “Durham’s Got It.” The song poked fun at all manner of topics from the Bull City, including a state law that made it illegal for restaurants to serve hard liquor by the drink even though patrons could bring their own liquor with them.

“We pay extra for our pleasure, ’cause our booze we’re forced to measure,” the group sang during an end-of-year event at the Law School. “We sure hate brown-bag sobriety.”

Were you a member of the Duke Law Dames?

Send your memories to communications@law.duke.edu for posting on the alumni website.