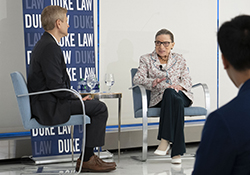 U.S. Supreme Court Associate Justice Ruth Bader Ginsburg told a rapt audience of students enrolled in Duke’s D.C. Summer Institute on Law and Policy and Law School alumni on July 24 that her commitment to law was cemented after watching attorneys defend people accused of un-American activities during the “Red Scare” of the 1950s.

“I had a professor of constitutional law who pointed out to me that we were straying very far from our most basic values … in this case the First Amendment, the right to think, speak, and write as you believe, and not the way a ‘Big Brother’ government tells you is the right way to think. And there were lawyers standing up for these people … so I got the idea then that being a lawyer was pretty nifty,” she said.

“You can earn a living but you can also do something outside yourself that will make things a little better for people less fortunate than you.”

Duke Law’s “Conversation with Ruth Bader Ginsburg,” now in its seventh year, is an annual highlight of the D.C. Summer Institute, which offers short courses taught by Duke Law faculty on topics of interest to individuals considering law school or careers in the public sector. The event was held at the Washington office of Jones Day.

Justice Ginsburg was introduced by Neil Siegel, the David W. Ichel Professor of Law and Professor of Political Science, who directs the D.C. Summer Institute.

Siegel, who clerked for Justice Ginsburg during the 2003-2004 term, noted that even before she was elevated to the Supreme Court she had already earned a place in history for her work in securing legal rights for women. He read her a note from his daughter, which said: “I wish you the best of health so you can continue to inspire small girls with big minds and hearts who need someone to look up to.”

Justice Ginsburg, 86, whose three bouts with cancer include treatment for lung cancer earlier this year, made clear that she intends to remain on the bench “as long as I can do it full steam. At my age – 86 – you have to take it year by year. I was okay this last term and I expect to be okay next term. And then after that, we’ll have to see.”

Remembering Justice Stevens
She spoke fondly of the late Justice John Paul Stevens, who retired from the Court in 2010 and died July 16 at age 99, saying he had an unusual combination of “brilliance and humility. He was a model of independence, nonpartisan comity, graciousness, and good humor,” she said.

In the last week of his life, Justice Ginsburg recalled, the two had attended a conference together in Lisbon, Portugal, and spent long drives in each other’s company. “His mind remained clever at age 99,” she said.

“He spoke of court cases, even footnotes and opinions, his military service in World War II, ballgames he’d attended. His conversation was engaging and his memory amazing. Perhaps he knew that at age 99 distant travel was a risk, but he wanted to experience fully the joys of being alive and he did just that almost to his last breath.”

Justice Ginsburg concluded her thoughts on her friend’s passing with a line from William Shakespeare’s Hamlet: “Take him for all in all. We shall not look upon his like again.”

Calling on ‘patriots’ to return civility to confirmations
In a recap of the Court’s 2018-2019 term, Justice Ginsburg called the retirement of Justice Anthony Kennedy “the event of greatest consequence for the past term and perhaps for many terms ahead.” She noted that the Court had agreed “considerably more often” than not during the term. Of the 68 cases argued before the Court, only 20 were resolved by a 5-4 or 5-3 vote, and the Court issued a unanimous judgement 25 times.

But she said she worries about the partisan turn that Supreme Court nominations and confirmations have taken, recalling that the Senate confirmation vote for the late Justice Antonin Scalia, nominated by Ronald Reagan, was unanimous, and her own confirmation vote, under Bill Clinton, was 96-3. Both their views – his conservative, hers liberal – were well-known at the time. “I had a history of being a flaming feminist,” she said, eliciting laughter. But later confirmation votes for Justices Elena Kagan, Sonia Sotomayor, and Samuel Alito began to split more sharply along party lines.

“[They are] trying to figure out how the nominee will vote on the Court, instead of asking, ‘Does this person have the qualities it takes to be a good judge?’” she said.

“But my hope is that we will return to the way it once was and the way it should be. I still think that someday there will be patriots on both sides of the aisle who say, ‘Enough of this dysfunctional government. We will get together and try to do business.’”

“I can say that my two newest colleagues are very decent, very smart individuals,” she said. Justice Ginsburg also noted that Justice Kavanaugh brought on board an all-female cohort of law clerks, which led to the Court having more female clerks than male clerks for the first time in its history. Women did not fare nearly as well as advocates, she said, with only 21 among the presenting attorneys in the Court’s 68 argued cases.

Reviewing the term – and the problems with gerrymandering
Asked by Siegel for her opinions on the “best” decisions of the past term, Justice Ginsburg named Timbs v. Indiana, a case where she wrote the unanimous majority opinion that states cannot impose excessive fees, fines, and forfeitures as criminal penalties.

She also said that the 5-4 decision in Department of Commerce v. New York was “a good one,” stating that adding a citizenship question to the 2020 census would defeat its very purpose.

“If the object of the census is to count everyone, you don’t want to put on a question that will intimidate people and will lead them to not answer the census questionnaire,” she said.

“There was an excellent opinion by the district judge who first heard the case … and it’s one of many examples how the Supreme Court is enlightened by what judges in the court that heard the case before it came to us, how much we benefit from their opinions.”

But Justice Ginsburg had a different take on the 5-4 joint decision in the two partisan gerrymandering cases heard by the Court – Rucho v. Common Cause and Lamone v. Benisek. She joined Justice Kagan’s strong dissent from the majority opinion, in which the Court declined to intervene in redistricting by North Carolina Republicans and Maryland Democrats, respectively.

She called gerrymandering “disheartening” to voters: “Your attitude is, ‘Why bother to vote?’ It’s destructive to a democratic system.”

Justice Ginsburg said she looks forward to next term, when the Court will take up some hot-button issues, including three cases involving whether the Civil Rights Act of 1964 protects gay and transgender individuals from discrimination. The Court has also agreed to review New York State Rifle & Pistol Association Inc. v. City of New York, New York, in which the issue is whether city laws regulating the transport of handguns pass constitutional inspection. It would be the Supreme Court’s first Second Amendment case in nearly 10 years.

“If I can say just one thing about next term, it is safe to predict that we will have our fair share of closely-watched cases,” Justice Ginsburg said.

Getting personal
Toward the end of the evening, Siegel posed some personal questions to Justice Ginsburg. Asked to name her early heroes, she cited pilot Amelia Earhart and the fictional teenage sleuth Nancy Drew. She also talked of her admiration for Dr. Valerie W. Rusch, the thoracic surgeon who treated her during her recent bout with lung cancer and is president-elect of the American College of Surgeons. A passionate fan of opera – an interest she shared with Justice Scalia – Ginsburg spoke of the female composers who had gone unrecognized over its history and noted with satisfaction the Washington National Opera's inclusion of women conductors.

“Any men you regard as heroic figures?” Siegel asked, to which Justice Ginsburg cited several past members of the Supreme Court: former Chief Justice John Marshall for his explanation of judicial review for constitutionality and Oliver Wendell Holmes and Louis Brandeis for their free speech decisions around the time of World War I.

She also spoke poignantly about her “most unusual marriage to a man who believed my work was as important as his,” referring to Martin Ginsburg, who died in 2010. “He was always my biggest booster,” she said. “I think I would have turned out to be a very different woman if I hadn’t married Marty.”

Video of the full event is available here.