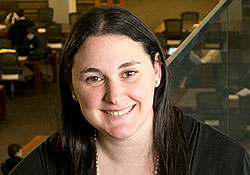 Consumers contemplating bankruptcy to escape unsustainable debt face a critical choice: whether to file under chapter 7 or chapter 13.

With a chapter 7 filing, their debts are forgiven and they emerge from bankruptcy in three to six months, but they must relinquish much of their property, including homes that are secured by mortgages. Under chapter 13, debtors enter into court-approved plans to repay at least some creditors a portion of the amounts owed over three to five years and homeowners must repay their mortgages in full. But if they fail to meet the requirements of their repayment plans, their remaining debts won’t be forgiven.

As Professor Sara Greene and two co-authors point out in a recent article, the ability to retain assets — usually homes — while repaying a portion of their debts holds both substantive and moral appeal for many consumers. But as they write in “Cracking the Code: An Empirical Analysis of Consumer Bankruptcy Outcomes” (101 Minnesota Law Review 1031-1098 (2017)), only about one-in-three chapter 13 filers successfully complete their repayment plans. “More than a million families each year struggle to repay debts in chapter 13 bankruptcy,” they write.

In the article, Greene and her colleagues, Parina Patel, an assistant teaching professor at Georgetown University, and Professor Katherine Porter of the University of California, Irvine School of Law, utilize data from the comprehensive 2007 Consumer Bankruptcy Project that supplemented information collected in the course of bankruptcy filings with surveys and interviews with filers. Using statistical methods, they predict outcomes for chapter 13 filers with considerable accuracy. Among filers they found least likely to be successful in chapter 13: debtors who file pro se, debtors who lack health insurance, parents of minor children, homeowners whose mortgages are unaffordable relative to their income, and African Americans.

Theirs is the first study based on such a detailed sample of national cases along with variables that take into account the multiple actors and processes involved in bankruptcy practice. It is also the first to use regression modeling that accounts for variation in practice across the country. The researchers’ goals, said Greene, included: illuminating areas of policy and practice by judges, trustees, and attorneys that could improve chapter 13 outcomes; addressing access-to-justice issues within the system; and overcoming a pervasive belief that local and regional differences in the way bankruptcy law is applied undercut possibilities for change.

“There is often a perception among bankruptcy lawyers and judges that they know what works and what doesn’t work in their regions, and is potentially better than what’s happening elsewhere,” said Greene. “We are saying that there is a way to look at this in a ‘big’ way, and there are some small things that can be done to improve the system on even a small scale.”

Exploring connections between law, poverty, inequality
With “Cracking the Code,” Greene adds to a body of interdisciplinary scholarship broadly focused on the relationship between law and inequality, including the role of law in perpetuating poverty and inequality. Greene’s data-driven empirical research, which is bolstered by a PhD in social policy and sociology as well as experience in both private and pro bono practice, examines how financial instability affects middle class and poor families, whether government programs designed to assist them work, how design and implementation of those programs can be improved, and the civil justice gap.

Her work has caught the attention of policymakers at a national level. Greene presented her study demonstrating how negative interactions with the criminal justice system discourage poor people of color to seek legal help in civil disputes to the White House Legal Aid Interagency Roundtable. And the recommendations in her study of 194 recipients of the Earned Income Tax Credit that showed its distribution as a lump-sum annual payment left them vulnerable to mid-year “financial shocks” was incorporated into a bipartisan proposal to redirect some of the tax credit to a savings and emergency fund.

“Cracking the Code” is not the first time Greene has waded into data from the 2007 Consumer Bankruptcy Project. In “The Failed Reform: Congressional Crackdown on Repeat Chapter 13 Bankruptcy Filers” (89 American Bankruptcy Law Journal 241-268 (2015)), she examined the factors that motivated repeat chapter 13 filings, supplementing her analysis of a random sample of petitions with in-depth interviews with bankruptcy trustees, lawyers, and judges. The study revealed refilers’ perpetual financial insecurity, not a desire to abuse the system.

“In chapter 13, you have to come up with a plan to pay creditors,” said Greene, noting that most consumer bankruptcy filings are made by members of the middle class and sparked by some form of financial shock. “Within those plans, there’s generally only a very small cushion, or none at all. If you suffer another financial shock — say your child gets sick and you lack paid leave but still have to take a month off work — you can no longer fulfill your plan. By then you might even be worse off, because you used your credit card to try to cover that month, so you have to file again. I don’t see that as abusing the bankruptcy system, but as the bankruptcy system not being able to adjust to the realities of living paycheck to paycheck.”

Greene’s starting point for the research was passage of the Bankruptcy Abuse Prevention and Consumer Protection Act of 2005 (BAPCPA), which limits the automatic stay that prevents creditors from pursuing a petitioner’s property after filing to 30 days, if the filing is made within a year of an earlier, failed petition. In “The Failed Reform,” she reported that judges, lawyers, and trustees largely opposed BAPCPA, and observed that judges make it clear with frequent rulings extending stays that they make no presumption of abuse by debtors.

She calls it a good example of law in action: “This was a case where judges essentially asserted themselves and said, ‘This new law does not make sense and does not help the bankruptcy system. There’s a way around this and we are going to take advantage of it, because we understand the system and know who is, and is not, abusing it.’”

Overcoming obstacles to reform
The fact that only about one-third of consumer bankruptcy filers successfully complete their reorganization plans has been confirmed by multiple studies since the 1980s. The 2007 Consumer Bankruptcy Project, which used surveys and telephone interviews to gain details relating to such matters as demographics and housing affordability that aren’t collected in court filings, gave Greene and her colleagues the chance to study exactly who chapter 13 might be helping or failing. They created a series of models based on bankruptcy theory and used the statistical method known as “fixed effects” to control for variations in local practices and to determine what is happening on the national level.

“Judges often think that system processes, such as the use of wage orders to make sure the payments to creditors are taken out of the filer’s paycheck, makes chapter 13 success more likely in their local districts,” said Greene, noting that only some districts use wage orders. “But that’s not what our data indicated.”

The researchers found that across the country, certain filers were unlikely to emerge successfully from chapter 13 bankruptcy, even taking into account differences in local legal culture: parents (particularly those with multiple children), individuals lacking health insurance, and homeowners whose monthly mortgage payments amounted to more than 30 percent of income.

If the clients’ mortgage is unaffordable based on family income, their attorney should consider telling them so and presenting alternative options to chapter 13, she said — if an attorney is involved at all. But many filers lack the advice of counsel in preparing documents and developing repayment plans, even though the issues involved and the mechanics in filing are complex, with online forms relating to consumer filings mixed with those for corporate petitions. Having observed, in “The Failed Reform,” that many chapter 13 repeat filers had simply made technical errors in their initial petitions, Greene pointed to her new study’s finding that pro se filers are among the most vulnerable to failure. Attorneys make a difference.

“Our data offer a good reminder about just how inaccessible bankruptcy is,” said Greene. “Many Legal Aid offices have stopped handling consumer bankruptcies and filing is costly. If you can’t find the money for a lawyer, you often can’t file, and if you file a chapter 13 bankruptcy yourself, the probability of success is low. It’s definitely an access to justice issue for the poor.”

Greene said the revelation of how race factors into failure in chapter 13 is the study’s “most troubling” finding. Black debtors file in chapter 13 more frequently than white debtors do — disproportionately, in fact, based on their representation in bankruptcy. The reasons require further study, but some researchers have suggested that bankruptcy attorneys push black filers towards chapter 13 over chapter 7 which, if true, would set up a “double whammy,” Greene said: “They’d be getting steered into it and they are not doing as well compared to whites when they’re in chapter 13.” A starting point for further research would be to collect information about race on bankruptcy forms, she said.

A central goal for Greene and her co-authors is simply to raise awareness of the ways filers often struggle in chapter 13. “Part of our argument is that there are certain things that judges and trustees and attorneys can look at,” she said. “They can look at affordability of housing and know that if it is, for the filer, unaffordable or severely unaffordable, they should consider discussing this with the debtor and presenting chapter 7 as an alternative that may have a greater likelihood of success.”

While some critics have suggested eliminating chapter 13 due to its low success rate, Greene feels that small changes could make big differences for many filers. She thinks the data presented in “Cracking the Code” can inform bankruptcy judges, trustees, and attorneys in this regard: “For example, if every district demanded some kind of cushion in repayment plans for shocks, we could see how much of a difference it makes”

Beyond that, Greene and her co-authors write that they hope their study “sparks a fiery debate,” informed by their unique data-set: “While bankruptcy may never be as ‘uniform’ as contemplated by the U.S. Constitution, the law can better serve its goals of rehabilitating debtors and repaying creditors by looking across local variation to identify levers for reform.”