Forging memories on the playing field

For Many alumni, lasting Duke Law memories were formed in the heat of competition — on athletic fields, basketball courts, and in bowling alleys.

“We didn’t lose a game in three years,” Spolar said of their time playing the all-university level. “And we were just a bunch of guys that came together.”

The Panama Reds won the law school league championship all three years that Spolar was on the team and enjoyed a good-natured rivalry with their chief opponent at the school, “Bullock’s Puppies.” During Spolar’s third year, some friends put together a coed team that won the all university division.

“It was just a lot of fun. We came together with a lot of former athletes that were really very good,” Spolar said. “The biggest thing is it was just good guys. We were very competitive. We needed something to be competitive about and that was just as good as it got with the demands of law school.”


He and his friends also left behind a legacy that had remained seared in the minds of their competition. He recalls meeting sports writer John Feinstein at a Duke alumni event in the mid-1980s. “He walked over and said, ‘You were that damn rover on that Panama Reds team we could never beat!’” Spolar said. “I had no idea!”

John Schohl ’83 knew the first time he walked on to the intramural basket- ball court as a 1L that he was in a little over his head.

“My first memory was of walking along the baseline just as another player was warming up and did a reverse slam dunk,” he recalls. “I thought to myself, ‘What have I gotten myself into?’”

“I played intramural basketball in college, so when I went to law school I decided I’d love to do it at Duke. I signed up for the law school team and all the first years were put together as a B team,” he said. “I found out why [the others] were on the A team. A lot of them were former college basketball players for Princeton, UCLA, or NC State.”

But it was all in the name of friendly competition, he said, with the goal of playing in the finals in Cameron Indoor Stadium.

“We had a great time. We became friends and made it all the way to the semi-finals of the graduate division. We played the law school A team and they destroyed us. It’s horrible — I always remember the losses. I remember being so close but so far from Cameron. That was the carrot.” 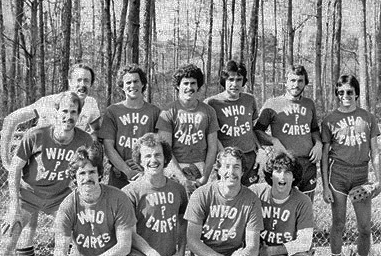 These members of the Class of 1981 named their softball team “Who Cares?”

Thanks go to Jamie Schwartz ’81 for being the first to identify all of his classmates, and to David Tarshes ’81 and Sharon Fountain ’82 for also contacting us about the shot.

Sarah Schott ’00 credits her classmate Jeremy Veit for building a team — and some lasting relationships — during their first week of law school.

“He really felt like we should have this social aspect to our law school experience,” she said.

It was exactly what they needed, even when the games became “highly charged,” she added. “It was much more an experience of banter and social bonding than it was a sporting event. It was a place where people could have some fun, blow off some steam,”

As it happened, some team members found lifelong partnerships. Schott and her husband, Brian King ’00, who celebrated their 10th anniversary this year, met through the team, as did Veit and his wife, Julie Ottoboni ’00. “None of us were dating when we started playing softball,” she said.

Today, Schott and her former teammates keep in touch through an email group.

“When someone has a baby or gets a new job we send a note and support each other,” she said.

Schott said of all her Duke Law memories, the softball ones are perhaps her fondest. “The thing that made for a fun, warm and fuzzy kind of feeling — that’s all anchored in softball.” 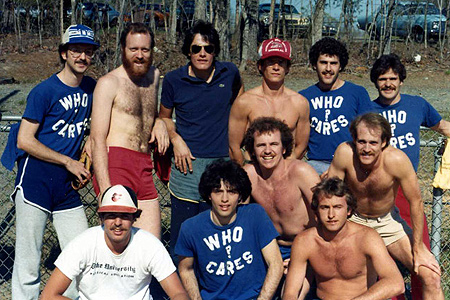 Summer "uniforms" for Who Cares. » View the photo gallery


You asked for it.

You asked if anyone could identify the softball players on p. 11 of the Advocate. In addition to identifying them, I am sending you some more photos that help tell the story.

The photo in the Advocate is of the “Who Cares” softball team made up of students from the class of 1981. The photo probably is from the fall of 1980.

Our primary rivals within our own class were Leo’s Losers and People’s Temple. We had so much fun playing Leo’s Losers for 3 years that just before we graduated we reserved a nearby public park and arranged to have the lights turned on so we could play a night game, which nobody has any idea who finally won.

And our class did not limit its athletic exploits to softball. During our third year, we participated for the first time in the University-wide intramural football season and promptly won the championship by completely demolishing 3 undergraduate teams in the playoffs by scoring over 25 points a game and holding all three opponents to a combined total of 7 points. And a team made up primarily of members of our class (with one notable exception – Scott Goetsch from the class of ’82) went to the final game of the University-wide basketball intramural league played in Cameron before dropping a tough game to the Business School.

And just to show you that everyone on our softball team graduated, I have included photo 159. And we all regularly attend our class reunions. 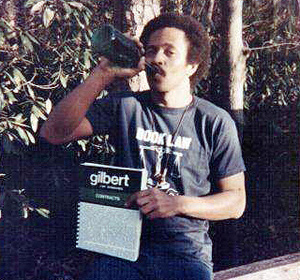 Michael Bellinger, shown in his student days, is a litigation partner at Arent Fox in New York.


My Dad informed me matter-of-factly that I was too tall to be an astronaut and too short to play in the NBA; my high school yearbook flatly stated “he’ll be a lawyer someday.”  So in 1976 there I was on a cold winter night, my first year at Duke Law School, not flying, not shooting jump shots, surrounded by law books, outlines and an empty wine glass.  I had just read a flier about the Duke university-wide one-on-one basketball tournament.  It was open to all undergraduate and graduate students, and all current varsity athletes, except basketball players.  The finals were played at Cameron Indoor Stadium.  How cool would it be to compete on the most storied college basketball court on earth.

There were, of course, several tough hurdles:  despite their annually dismal ranking, for example, the football team is usually comprised of rather large and talented athletes.  There was Larry Doby, Jr., an undergraduate who was perhaps the most talented athlete I had ever met; there was Jack Marin, a former NBA star who regularly put on unwanted clinics in the intramural building.  Anyone who beat them was sure to bedevil me.  But one never knows; sometimes people simply oversleep.  I signed up.

The finals were held at half-time of the Duke-Maryland game.  I sat waiting in the Duke locker room, through which so many Duke stars had passed.  Suddenly the door flew open and in bounded Gene Banks and the boys.  Maryland was well behind and the Duke team was energized.  Gene, a friend, looked at me and screamed, ‘Don’t embarrass us.”  The rest, all of whom I knew, laughed heartily as Jim Spanarkel assured them that I couldn’t hit the broad side of a barn.  And out into a frenzied atmosphere I went.

I never played basketball at Madison Square Garden.  And I have never experienced weightless flight.  But I did fly solo in a single-engine Piper Cherokee that spring.  And I did fling jumpshots and make a reverse layup before an SRO, loud, crazed student body at Cameron Indoor Stadium.

I even have a plaque on my office wall to prove it.


Although I had spent the fall of my first year acclimating academically, early in the fall of 1963 - my second year - I was recruited by two third-year students who had learned of my football background. I joined the team and became a regular in the backfield.

We won the University-wide intramural football championship, in the process defeating all comers, including teams from several of the 'jock houses.' Just after our season concluded, someone arranged a game between us and the UNC university champions, to be played in Chapel Hill.

On the appointed day we convened at the law school around mid-day. But we never made it to UNC -- because it was November 22, and the news came over the radio from Dallas just as our caravan was preparing to leave the parking lot.

(The Advocate editor's note: Mr. Moyer also offered this observation that the "Legal Eagles" pictured in the fall Advocate had to have played in the fall of 1961; members of the class of 1962 would have graduated before the 1962 football season. We accept that correction with thanks.)

Do you have a memory of playing sports at Duke Law?

Send it to Frances Presma for posting to the Duke Law website.