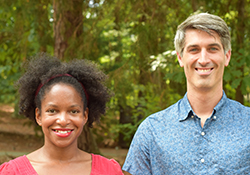 A clinic alumna, Okoh ’09 brings public sector experience as a prosecutor and government attorney to her fellowship. Most recently she focused on disability law in private practice. Miller, who holds a JD from Yale Law School, was previously a clinical fellow in Harvard Law School’s Food Law and Policy Clinic and serves as founding policy director at Acre Policy, an agricultural policy nonprofit. He also farms in Orange County, N.C.

“These clinical fellows bring depth and unique perspectives to our teaching and client services,” said Clinical Professor Michelle Nowlin JD/MA ’92, the clinic co-director. “Lee and Michele are talented and dynamic attorneys, and we’re really excited to have them as part of our team.” The clinic fellowships are a vital part of the clinic’s mission to train the next generation of environmental leaders, she added.

Okoh: Making connections between environmental health and environmental justice
Okoh, who was a member of the clinic’s second class of students, is now pursuing a masters of public health degree from George Washington University. She said she appreciates being able to advocate for people who are historically disadvantaged and too often left out of environmental discourse: “The environment is something we think of as being separate from ourselves, but we are part of it. That is something that is underscored when it comes to environmental health.”

That was often the central issue in her disability law cases, she said. “When I dealt with my clients, often environmental health would be the real issue, but I would be coming in at the end stage, after whatever exposure they had led to the point where they had developed a disability. I felt driven to step in earlier in the process and be able to take more of a preventative role.”

She launched her firm in 2016, after spending four years as an assistant district attorney for Edgecombe, Nash, and Wilson counties in North Carolina. From 2010 to 2012 she was an associate attorney general for the N.C. Department of Justice, where she was previously a fellow.

Miller: Using law and policy tools to “repair” agriculture
Miller said he was drawn to the clinic’s commitment to environmental justice: “It is not an afterthought but baked into the way we select cases, train students, and serve our clients.”

Miller, who was part of the team that launched the Duke Campus Farm while pursuing his master in environmental management at the Nicholas School of the Environment, is interested in the potential of law and policy as tools to repair agriculture and make it regenerative rather than exploitative. “Regenerative land management practices can begin to heal our land base and protect our water and do the basic work of environmental sustainability,” he said. “But ‘repair’ also means that we must face agriculture’s history, rooted as it is in land theft and slavery, and imagine a way to raise food and fiber that empowers marginalized peoples and centers the sovereignty of their communities.”

Farming, done right, also has the potential to address the climate crisis, said Miller, who is co-teaching a Bass Connections class that Nowlin is leading on regenerative grazing. “Agriculture is the only major greenhouse gas emitting sector that could instead be a carbon sink. If we aren’t doing everything we can to help a new generation get onto the land and start sinking carbon into the soil, we are missing one of the greatest opportunities to both slow and prepare for the coming climate crisis.”

“Lee’s experience as a farmer, coupled with his policy analysis expertise, builds out our portfolio on agricultural adaptation to climate change, sustainable agriculture and water scarcity,” said Longest.