For Elizabeth Tobierre '19, the practice of law is personal: "Law is made through people's interactions" 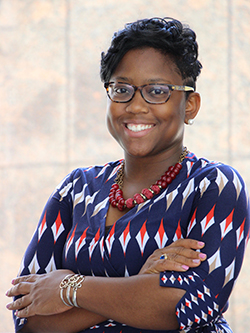 Elizabeth Tobierre began her undergraduate studies at Duke University with a strong interest in science and math. But after a summer doing medical research, she decided she wasn’t cut out for life in a lab.

“I knew right away that I couldn’t see myself spending years in a hospital or years in a lab. I needed to be out there,” she says.

Fortuitously, Tobierre attended a lecture at Duke Law School during Black History Month during which the speaker talked about the civil rights movement and its impact on the law. Deeply concerned with social justice issues, Tobierre realized that a legal career would give her the chance to work with people and effect positive change.

During her three years at Duke Law, Tobierre has enjoyed the high degree of interaction with professors and multiple opportunities to work with clients in the Civil Justice and Children’s Law Clinics. She hopes to bring that personal touch to her work in white-collar litigation and regulatory enforcement when she begins her career at Davis Polk & Wardwell in New York later this year.

“As I transition into the firm, I’m trying to emphasize the people aspect of the work that I love,” she says. “In the clinics I really loved working with people and hearing people’s stories.”

In the Civil Justice Clinic Tobierre worked on wrongful eviction cases and helped a client clear her name from the North Carolina Health Care Personnel Registry, which lists health care workers accused of wrongdoing. Being on the list makes it difficult for the person to get another job, as potential employers must check the registry before hiring.

“The claim was unsubstantiated and I worked directly with her to get her name off that list, so it was a very transformative experience, being put into the role of a counselor and an advocate,” Tobierre says.

She also participated in a semester-long externship with the Durham Expunction and Restoration Program (DEAR), working more than 120 hours to help clear criminal charges and convictions and restore suspended or revoked drivers’ licenses for Durham residents who cannot afford an attorney. That experience, she says, exposed her to a segment of society that is largely ignored – the one in seven North Carolina residents whose licenses have been suspended because they cannot afford to pay court fees.

“It brought the law into action versus on paper,” Tobierre says of DEAR. “Everything I had researched, there was actually a program to take that and try to come up with solutions and give people a second chance. And there’s so much need out there, so to actually help as a law student was wonderful – it’s the kind of thing I always wanted law school to be about, and Duke gave me the opportunity.”

Tobierre says she found the right balance of doctrinal studies and hands-on work at Duke, as well as multiple mentors and role models among the faculty. She singles out Jesse McCoy, the James Scott Farrin Lecturing Fellow and Civil Justice Clinic supervising attorney, for his ability to apply the law to issues of social justice; James Coleman, the John S. Bradway Professor of the Practice of Law and her first-year Criminal Law professor who “always made time for me;” Jerome M. Culp Professor of Law Trina Jones for the “powerful and transformative, deep-dive” teaching she displayed in Critical Race Theory; and Lisa Kern Griffin, the Candace M. Carroll and Leonard B. Simon Professor of Law, who taught both Evidence and Criminal Procedure. “She makes you think about the law in different ways,” Tobierre says of Griffin.

Tobierre, who hails from St. Croix, says she hopes her career will eventually take her home. A big fan of the TV legal drama Matlock, she pictures herself on the bench one day - and notes that there are federal district courts in the U.S. Virgin Islands.

"I love the courtroom because I believe that law is made there, through people's interactions," she says. "I can see myself as a trial attorney or a judge."