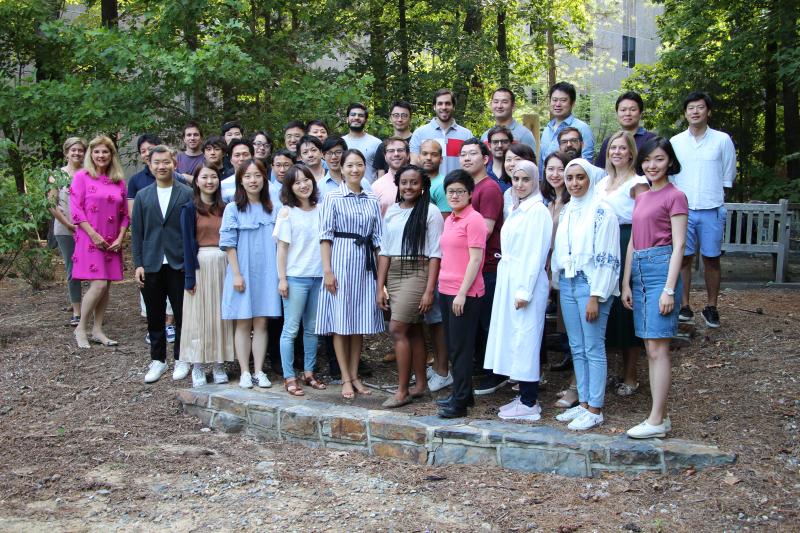 Tatiana Gushchina, a senior associate in a midsize Berlin law firm, often finds herself reviewing and drafting contracts in English and says she feels quite proficient in the vocabulary relating to her areas of specialty: mergers and acquisitions, venture capital transactions, and corporate law. “But when I get into other areas, it’s a new vocabulary,” says Gushchina, who has studied law both in her native Russia and in Germany.

Gushchina has spent the past four weeks at the Duke Summer Institute on Law, Language, and Culture, deepening her knowledge of the U.S. legal system alongside 33 other attorneys hailing from 13 different countries. It will be helpful in her increasingly international practice, as will her expanded legal vocabulary and overall English proficiency. And her SILLC sojourn has also satisfied her love of exploring new cultures.

“It’s a very nice month away from the office,” she says with a laugh. “It’s an enriching experience to be in a group with lawyers from all over the world, to learn about their countries’ legal systems and cultures as well as for networking. We aren’t just students but professional colleagues.”

Twenty-nine of Gushchina’s classmates are, in fact, staying on at Duke Law to begin the LLM program, while two more are spending the next year as visiting scholars at the Law School. Laying the groundwork for their success during the academic year is SILLC’s primary goal, says Director and Senior Lecturing Fellow Marily Nixon. To that end, Nixon points to four primary objectives underlying curricular design and extracurricular programming: introducing participants to the basics of U.S. law, including how the legal and court systems operate; building their legal vocabulary and getting them as comfortable as possible speaking and writing in English; helping incoming LLM students and visiting scholars get settled at Duke Law; and teaching them such essential classroom and professional skills as briefing cases and understanding legal citations.

In addition to classroom instruction — and constant conversation — on such topics as the origins of common law and the separation of powers and federalism in the U.S., Nixon and her teaching partner, Senior Lecturing Fellow Marilyn Forbes, engage SILLC students in multiple hands-on written and oral exercises: a mock trial, a negotiation, oral arguments on a First Amendment issue, and drafting case briefs and memoranda, to name a few. Members of the research and writing faculty familiarize students with the J. Michael Goodson Law Library, citation, outlining courses, and how to take exams, and a Duke University expert in teaching English as a second language leads instruction on business writing.

Numerous members of the Duke Law faculty have joined the group to deliver guest lectures on topics as diverse as U.S. elections and gerrymandering, the First Amendment, alternative dispute resolution, criminal convictions, and U.S. environmental law. And during a field trip to the Durham County Courthouse where students observed court in session, Durham District Attorney Satana Deberry ’94 met with them to discuss criminal justice procedure and reform.

Nixon and Forbes infuse every exercise with insights from their extensive careers in practice — Nixon’s focused on environmental and administrative law and Forbes’ on litigation and torts — as well as their shared interest and experience in exploring and adjusting to new cultures. They particularly enjoy the participants’ final presentations to their classmates, which focus on comparative legal issues.

“They have to think about something they’ve heard in the course that is different in their country and present it,” says Forbes, who teaches Negotiation, Ethics for Civil Litigators, Pretrial Litigation, and Legal Interviewing and Counseling at Duke Law during the academic year. “They’re on their feet and taking questions. And the presentations are recorded, as were their first presentations to the class. It gives them a true metric of how much improvement they make in such a short time.”

Adds Nixon, who also teaches courses relating to environmental law, legislation and regulation, and problem-solving for businesses at the University of Pittsburgh: “It’s really hard to convey how exciting seeing their progress is for us as instructors.”

Getting used to “cold calls” and speaking up in class

For most students, SILLC offers their first exposure to the Socratic method of using questions to spur critical thinking that is foundational to U.S. legal education, says Forbes. “The idea of addressing ‘what do you think — did the court get it right, or was this a good argument to make,’ is not intuitive for many students, based on the format of their prior legal studies.”

Francisco Vial, a senior associate in the capital markets group of one of Chile’s largest law firms, confirms that navigating the Socratic style represents a stark contrast to the lecture-based learning he experienced in law school. “In Chile, the lecture is introductory and then you study to go more deeply into the subject. Here, you have to study before class and be prepared for the professor to call on you for information and for the facts of the case.”

Eun Woo “Helena” Lee, a prosecutor from Korea, was similarly surprised by the “cold-calling” that distinguishes the Socratic style of teaching when she first witnessed it as a visiting scholar at Duke Law in 2015, auditing courses on sentencing and punishment and corporate crime. Seeing how actively the international students participated in the classroom discussions was a motivating factor for enrolling in SILLC in advance of her LLM, she says.

Like many of her classmates, Lee points to the small-group discussions that start each instructional day at SILLC as being particularly helpful; led by Nixon, Forbes, and the two SILLC teaching assistants, they allow students to discuss news and current affairs or such matters as U.S. legal slang and how citizenship rights and practices in the U.S. differ from those in their home countries. “These discussions help me feel comfortable in speaking spontaneously and expressing my opinion,” Lee says. Vial agrees, adding that it’s fun: “In the small groups you get to know your classmates better while you speak and share information.”

Indeed, the wide-ranging discussions that sometimes touch on such hot topics as politics, race, immigration, and gender help strengthen bonds of trust and friendship among the SILLC students, as do the daily communal lunches they share, often joined by members of the Duke Law faculty from varying legal disciplines. Along with specific exercises comparing U.S. business etiquette to that in the students’ home countries — even nuanced differences in the way business cards are presented and accepted — they are essential elements of SILLC’s cultural mission, as are the program’s social events: a weekend cookout at Forbes’ rural home, a trip to a Durham Bulls baseball game, and a “home country potluck.”

“The design of the SILLC program is very good,” says Vial. “Every class and every activity is very well thought out.” And every part of it, directly and indirectly, cements friendships among the students. “I think that’s the best thing about SILLC — the relationships,” says Hyun Hee Jung, a Korean judge and 2020 LLM candidate.

Does SILLC deliver on its goal of preparing incoming LLM students for success in their studies? Speaking after taking the New York bar exam, 2019 LLM graduate Assett Dulatbekov, a Kazakh attorney and 2018 SILLC participant, calls its blend of theory and practice a “great start” for internationally trained students: “The classes helped me clearly understand the fundamental basis of the common law system and to be oriented in American jurisprudence. Every day classes with the group of International lawyers from different part of the world enhanced my communication skills and broadened my intercultural competence. From the first days, we were actively engaged in classwork with law professors and practitioners and experts, which helped me to determine which classes I would like to take in the academic year.” One of Dulatbekov’s SILLC classmates is following his lead and returning to Duke Law as a member of the LLM Class of 2020.

Gushchina says she will be returning to her Berlin law firm with a new sense, from her teachers and classmates, of legal developments in the U.S. and elsewhere in the world. And inspired by her discussions with Duke Law professors, she hopes to work research and scholarship into her professional life. “It’s always good to look at what you’re doing with fresh eyes,” she says, calling SILLC a form of professional development and a refreshing break. “If you have an international outlook and practice and are interested in other cultures and legal topics all over the world, it’s a really good program.”