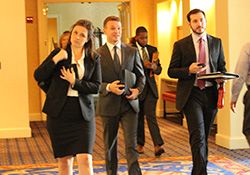 Students participating in on-campus interviewing in 2017.

Over 91% of Duke Law’s 2018 graduates were employed in legal jobs ten months after graduating, according to data submitted to the American Bar Association (ABA).

As of March 15, 201 of the 220 members of the class of 2018, or 91.4%, were working in full-time, long-term positions requiring bar passage that were not funded by the school. Duke ranked third among all U.S. law schools on this measure of employment, the third year in a row it has been in the top three.

“Duke Law is consistently among the very best law schools in the country for employment success,” said Kerry Abrams, James B. Duke and Benjamin N. Duke Dean of the School of Law and professor of law. “Whether they want to work in private practice, government, public interest, or a judicial clerkship, all Duke Law students receive the support they need to launch their legal career in a job that is right for them.”

Duke ranked sixth among all law schools for the percentage of 2018 graduates employed in federal clerkships or at law firms with more than 100 lawyers.

Other highlights from Duke’s employment summary for the class of 2018:

Duke Law’s Career and Professional Development Center provides individualized support for students beginning with their orientation. Career counselors meet one-on-one with every first-year student at least three times, and the Law School hosts a variety of extracurricular programs and networking events to help them prepare for their job search and interact with employers.

Students also receive specialized assistance with their specific career ambitions, including a wide range of support for those interested in public interest fellowships and government positions and a dedicated clerkship programs office to assist with applications and interviews with judges.