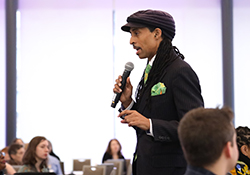 More than 100 environmental advocates, academics, policymakers, and students gathered at Duke University on March 8 and 9 to explore how disasters create and exacerbate environmental inequities in the United States, and their roles in improving preparedness and response.

The second annual environmental justice symposium, titled “Resilient Communities: Environmental Justice in the Face of Disaster,” held at the Penn Pavilion, was jointly organized by the Duke Environmental Law and Policy Clinic and the Duke Integrated Toxicology and Environmental Health Program. The two-day event attracted academics, community leaders, nonprofit representatives, and policymakers from across the United States and included a bus tour of swine operations and hurricane impacts in Eastern North Carolina, panels on state and national issues, and interactive discussions.

A central goal of the symposium was to build collaborations between directly-affected communities and academic institutions, between disciplines, and across regions, said Clinical Professor Ryke Longest, who directs the Environmental Law and Policy Clinic. “The reality is, the types of silos we create with the organizations to which we belong, the titles we put on, are things that separate us. We came together to learn how to work in community with one another, because all flourishing is mutual.”

The Rural Empowerment Association for Community Help opened the symposium with a tour of areas of North Carolina where hurricanes affected hog waste lagoons and spray fields associated with factory-scale farming operations. During an evening panel, leaders of nonprofit organizations in the state offered an overview of the environmental justice organizing happening in the state around disasters, both natural and artificially created.

Other symposium speakers addressed the impacts of disasters in Lumbee and African American communities and on farmworkers in North Carolina, as well as on residents in Puerto Rico, Alabama, and Texas. In addition to describing the disproportionate impact of disasters on communities of color, they discussed how those communities are involved in documenting environmental harms, building resilience, and pushing for enforcement and policy reform.

Although many participants spoke about hurricanes, Esther Calhoun, the executive director of Black Belt Citizens Fighting for Health and Justice, spoke about the repercussions of clean-up efforts after an industrial disaster.  Following a major spill in predominantly white, middle-class Kingston, Tenn., federal and state regulators ordered removal of the spilled waste due to its toxic impacts. More than four million tons were shipped out of Tennessee to Calhoun’s hometown of Uniontown, Ala., a small, low-income community, where 90 percent of residents are African American. Calhoun challenged participants to talk about racism in the context of environmental injustice and to understand the burden of people whose homes and land are affected by multiple polluters.

“I won’t shut up. Because we’ve got too much out there that we need to be fighting for,” she said, to a standing ovation.

Marianne Engelman Lado, an attorney and professor at the Yale School of Forestry and Environmental Studies, has been part of the response to multiple disasters and is working with people in Uniontown on legal strategies. She urged students to think seriously about how they work in service to communities fighting for their future. “What will be your role if we take seriously the role of lawyers and technical service providers on tap but not on top?” she asked.

Symposium participants broke into small groups to address such questions as how to design policies that allow people to recover and thrive after disaster, how to make scientific research useful and actionable to non-scientists, how to hold institutions accountable, and how to streamline information to reach governmental agencies. They reconvened to present their ideas and to distill lessons and build connections for improved disaster response in their communities.

Longest said those conversations form the core of what attendees took away from the symposium. “We started out with a big keynote speaker, then we went down to communities and heard from the heroes in those communities,” he said. “Then I looked around the room and saw communities forming around tables. Now we have to hold each other accountable and hold each other up.

The symposium was supported by the Duke Office of Faculty Advancement and co-sponsored by Bennett College, the Yale School of Forestry and Environmental Studies, the Nicholas School of the Environment, the Environmental Law Clinic at Columbia Law School, the Union of Concerned Scientists, and Vermont Law School. Development of the agenda was guided by a steering committee of representatives from sponsoring organizations and other nonprofits, including the NAACP, the North Carolina Conservation Network, and the North Carolina Environmental Justice Network.