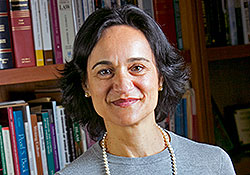 Professor Doriane Lambelet Coleman will testify before the full House Committee on the Judiciary on April 2, on the matter of H.R. 5, the “Equality Act.” The hearing begins at 10:00 a.m. in 2141 Rayburn House Office Building.

Introduced in the House on March 13 and sponsored by Rep. David Cicilline, D.-R.I., the Equality Act proposes to prohibit discrimination on the basis of sex, gender identity, and sexual orientation, “and for other purposes.”

In her testimony, Coleman will address the bill’s implications for women’s sports.

Coleman, a former national collegiate track champion who competed internationally, is an expert in anti-doping rules who has practiced, taught, and written about sports law with a focus on the Olympic movement and eligibility issues. Her current work focuses on the differences between biological sex and gender identity and the implications of those differences for institutions ranging from elite sport to education and medicine. She is the author of “Sex in Sport,” 80 Law & Contemporary Problems 63-126 (2017), and has written recently on the topic for The Volokh Conspiracy and The New York Times.

In February, she testified before the Court of Arbitration for Sport (CAS) in Lausanne, Switzerland, in a case that also had broad implications for the participation of intersex and transgender athletes in women’s competitions. She was one of five expert witnesses providing evidence in support of the International Association of Athletics Federations (IAAF), the world governing body for track and field, in an arbitration with South African runner Caster Semenya, who has naturally elevated levels of the hormone testosterone. Semenya, a two-time Olympic gold medalist, has challenged pending IAAF eligibility requirements that would require “athletes who identify as female but have testes, and testosterone levels in the male range, at least to drop their testosterone levels into the female range in order to compete at the elite level in the female classification.”