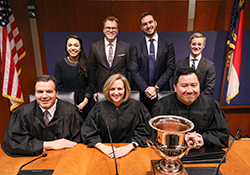 Farrah Bara ’20 and Luke Morgan ’19 were awarded the 2019 Dean’s Cup by a three-judge panel after squaring off against Hugh Hamilton ’19 and Jack Smith ’20 in the final round of the moot court tournament on Feb. 25. Smith was named best oralist. The four finalists briefed and argued a Ninth Circuit case, Rodriguez v. Swartz, concerning civil liability in the case of a fatal cross-border shooting of a Mexican teenager by a U.S. Border Patrol Agent. A petition for certiorari in the case is currently pending before the Supreme Court.

Judge Nancy Moritz of the U.S. Court of Appeals for the Tenth Circuit, who served as the panel’s chief justice, called the competitors’ advocacy skills “some of the best I’ve seen. You each had a compete command of case law. Honestly, I don’t often get to see this caliber, even though I see some very well qualified and capable practitioners in our circuit.”

Judge James Ho of the U.S. Court of Appeals for the Fifth Circuit said the differences in skill between the competitors were “extraordinarily, infinitesimally small” and singled out Bara’s “powerful” rebuttal.

Bara and Morgan argued for the petitioner, Swartz, who, standing on U.S. soil, fired 10 fatal shots across the border at an unarmed 16-year-old Mexican citizen. Bara and Morgan asserted that Swartz was protected from prosecution under the theory of qualified immunity and challenged the Ninth Circuit’s extension of a Bivens remedy, deriving its name from Bivens v. Six Unknown Named Agents, to the victim’s mother. A Bivens remedy allows a cause of action for damages when a federal officer is found to have violated a constitutionally protected right.

In her opening argument, Bara argued that the Ninth Circuit erred when it extended an implied cause of action under Bivens and said that neither the U.S. Customs and Border Protection agency nor Congress authorizes civil liability for such conduct. She noted that Swartz was subject to criminal prosecution and had, in fact, been tried and acquitted of the killing.

Challenged by Moritz about a remedy for the plaintiff, Bara cited a prior Supreme Court ruling, Schweiker v. Chilicky, stating that the absence of a remedy does not imply the existence of a Bivens action.

Morgan argued that while the shooting constituted an unreasonable seizure protected under the Fourth Amendment, the victim did not possess that right because he was a non-citizen with no sufficient voluntary connections to the United States to render him part of the national community.

Hamilton and Smith contended that while the case represented a new context for a Bivens action, Swartz failed to exercise reasonable care in his use of force and the Court had previously rejected what they called “formalistic extraterritoriality inquiries” that would exclude the victim from protection of U.S. constitutional rights.

“This Court’s jurisprudence for over a hundred years has identified this common thread of impracticability and anomalousness in practical considerations,” Smith said. “There are no real practical limits or practical obstacles to extending or to recognizing the right here. And there can be no more obvious case of an unreasonable use of force than the shooting of an unarmed child in the back ten times.”

The judges praised all four students’ agility in responding to questions and to arguments from their opponents. “One of the most important things about oral argument isn’t arguing, it’s listening,” Ho said.

Judge Luis Restrepo of the U.S. Court of Appeals for the Third Circuit reiterated Ho’s compliments, and added that he was impressed by the students’ responsiveness and professionalism. “You listened to the questions and you answered them,” he said. “You didn’t shy away from the difficult questions and you did it in a very polite and deferential manner, which is important. You are welcome in the Third Circuit any time.”