Where is home? What is it famous for?

I am originally from Seoul, the capital of Korea. In accordance with the regular rotation system for Korean judges, three years ago I moved to Hongeong, Chungchungnamdo. The people from Hongseong are famous for their unconditional love to their nation. Probably as a consequence of this, a substantial number of Korean activists during the Japanese occupation era came from Hongseong. This city is a great place to live mainly because it has a great variety of high quality local products and is mostly free from natural disasters.

What is your field of interest? Why?

During my six and half years as a judge, I dealt primarily with civil and family law proceedings, which have become my primary areas of focus. More broadly, I am interested different types of judicial remedies such as preliminary or permanent injunctions. Currently, I am learning about U.S. rules of civil procedure and am planning on taking Family Law next semester.

Why did you decide to pursue an LLM at Duke?

Duke is known for its excellent faculty and a wide variety of class offerings that combine theory and practice. As a practicing lawyer, I wanted to attend a school that could provide me with practical knowledge and understanding of the reality of U.S. legal practice. Also, Duke is well known as a leader in the study of the judiciary systems. Finally, as a father of three children, I considered the excellent living environment and secondary education in Chapel Hill to be very important.

Before coming to Duke, you worked as a judge. How do you think the LLM will help your career?

Even though the law is becoming more specialized and diverse, I still think most areas area closely interrelated. I believe it is important for a judge to understand every major field of law and to comprehend the relationships between them. Studying a foreign legal system along with its legal principles and comparing them with those of Korea will give me a better sense of those interrelations, as well as the opportunity to learn about different legal concepts and practices. In addition, comparing the two system will provide me with a deeper understanding of each.

What’s the biggest advantage of studying in the United States?

The United States is a very interesting country. Even though I see conflicts and problems arising from its incredible diversity of cultures, and ethnic groups, the U.S. seems to have dealt with those conflicts admirably through the effective use of its legal system. Also, comparing the American legal system with the one in Korea and interacting with such diverse group of students and faculty has given me a great opportunity to broaden my intellectual horizons.

What have you liked the most about Duke so far?

It is very hard for me to choose because I love many different aspects of Duke including excellent professors, good infrastructure, and the blue and beautiful sky of North Carolina. However, if I have to choose one, I will say the staff members at the International Studies Office and the Office of Student Affairs. They have helped international students not only to study well, but also to adapt to a new environment. One of the most memorable things for me thus far, has been the International Week.

In one word or sentence, describe your Duke Experience.

It’s not easy, but worthwhile.

Describe yourself as a student.

I have always been a “student” because I always strived to learn from others, even as a judge in Korea. As one of the oldest LLM students at Duke, I feel very fortunate to take such systematic and intensive classes from excellent professors.

What are your plans for the future?

I will return to Korea and continue working as a judge. I anticipate applying the knowledge and experiences gained at Duke in my future endeavors while on the bench, which will not only include hearing cases but outreach beyond the courtroom to improve Korea’s judicial system.
Tags:
Duke Law News 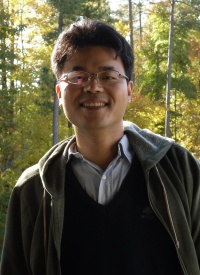