On a mid-June afternoon at a Greensboro, N.C., research park, Lesley Hamming ’13, wearing a lab coat and goggles, peers into a test tube Aakash Gandhi is using in a science experiment. A rising senior at the North Carolina School of Science and Math, Gandhi is mixing silver particles with E. coli bacteria and awaiting the results. He is participating in NanoBusiness Talent, a nonprofit science camp Hamming founded in 2008 to inspire young people to pursue nanotechnology — the study of engineering on a molecular scale — in college and beyond, as she did prior to entering law school at Duke.

Her passion for the subject is palpable as she explains the process Gandhi is working on, which mirrors experiments going on in professional laboratories; the silver that kills the E. coli bacteria is used in manufacturing products such as band aids and bed sheets. Nanotechnology also is used widely in medical research, adds Hamming, who has a PhD in material science from Northwestern University and aims for a career in patent law.

“Some researchers are using nanoparticles to target cancer. Gold nanoparticles are inserted into a cancerous area, and then the gold particles target the cancer. An infrared light is used to heat up and burn cancer cells, “she says. “Targeted phototherapy with gold nanoparticles hasn’t been given to patients yet because it’s still in clinical trials. However, several patents have been granted for this process.”

Taking a leave from her 1L summer job at Emory University’s Technology Transfer Office to oversee two weeklong camp sessions, Hamming builds training in the social and ethical implications of nanotechnology, development, patents, and business into the curriculum, facilitating interaction between campers and entrepreneurs, as well as scientists.

“I want to get our students more inspired at a younger age, and linking them with entrepreneurs is a good way to inspire them,” she says. “Our national economy is going to depend on our intellectual ideas and innovation.”

Hamming reaches out to emerging technology companies to partner with NanoBusiness Talent. She is currently partnering with the Contemporary Science Center in Research Triangle Park and seeking others. She has found mentors for the 2011 camp nearby at its host, Greensboro’s Gateway University Research Park, which is home to the Joint School of Nanoscience and Nanoengineering, a joint venture of the University of North Carolina at Greensboro and North Carolina A&T University.

Hamming’s students also got the chance to see how Greensboro area companies use nanotechnology. During a trip to Advaero Technologies, Inc., a highlight according to Gandhi, they saw a new material being used by the military — the world’s strongest carbon-fiber composite, which has the ability to lift eight cars and can be ballistics proof.

With more than 40 students enrolled in her 2011 camp, Hamming hopes that in the long term it is only one avenue in her effort to connect students with science. “I would also like to help with our national science public policy, or work on some kind of national board in which I would determine the future of our science education,” she says. “We are losing a lot of our talented and bright students, who are choosing not to enter the science field.” 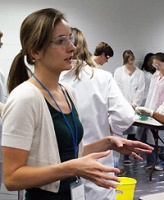