Before attending the University of Florida, Tom Crosby served in the U.S. Air Force, working as a computer programmer and an honor guard instructor from 2001 to 2005. While enlisted, Crosby witnessed photos from the Abu Ghraib scandal with horror, believing the perpetrators of those crimes dishonored the uniform he wore as a member of the 82nd Communications Support Squadron and at the Base Honor Guard. His reaction inspired him to pursue the study of law.

Crosby hopes to pursue a career as a military lawyer in the Air Force or Navy Judge Advocate General Corps. “During my enlistment, there was a point when it looked like I was going to be deployed, and one of the pre-deployment stops was the JAG office to do a will and power of attorney,” he said. “I talked to the guys in the office and they loved their work and what they did in connection to the mission. And deployed judge advocates do things like assist commanders with the legality of targeting decisions – serious international law issues. It all seemed fascinating to me.”

Crosby looked for law schools with strong national security programs. As a married student, he also needed to take his wife’s career as a software engineer into account.  Duke’s combination of high-level scholarship and proximity to the Research Triangle – one of the most prominent high-tech research and development centers in the country – provided a top market for his wife to find opportunities in her field.  They both decided Duke was right when they visited during Admitted Students Weekend.

“Duke had the perfect combination of low cost-of-living and an incredible thriving business market,” he said.” She’s making what she would have made in D.C., but our expenses are significantly reduced. Also, she’s from Florida and when we went to visit New York in April and it was 45 degrees, she just said, ‘No.’”

“I feel like it gave me a really solid footing because those are three professors with very different views of national security and international law,” he said. “I appreciated getting those different perspectives, and I think it helped me develop a better understanding of those areas and how the laws have changed in the last ten years.”

Crosby also worked with Silliman on an independent study examining the legal aspects of a possible U.S. government prosecutions related to the WikiLeaks website, which published reams of classified military and government documents online.

“In evaluating any sort of government prosecution of (WikiLeaks founder) Julian Assange and/or individual leakers,” Crosby said, “While it’s less problematic on the leaker side, once you start talking about prosecuting Assange or other people who published leaks, you’re treading on dangerous ground with regard to what this will do to the national security journalism community. It can also start to seem like scapegoating when you prosecute some people who published leaked materials, while established journalists for major newspapers have made entire careers out of printing items leaked from anonymous government sources. If you’re going after this guy, why aren’t you going after all these other people?”

During his time at Duke Law, Crosby worked with the Veterans Disability Assistance Project (VDAP), and the Spring Break Wills Project. Working for the Veterans’ project was a natural fit for him. “I know what it means to serve, and my perspective with the Honor Guard showed me just how important it was to give back to those who give so much.” Crosby worked with the VDAP during the school year, then continued working as an intern both after his first and second years of law school. During spring break of his third year he worked on the Spring Break Wills Project, writing wills, powers of attorney, and health care powers of attorney for residents of two rural North Carolina counties. “The instant gratification of being able to give my clients peace of mind was incredibly rewarding,” Crosby said.

While he made national security law a key academic focus, Crosby also opened himself to courses in other areas. His two favorite courses at Duke were Trusts and Estates with Senior Lecturing Fellow Curtis Twiddy and Evidence with Professor Lisa Griffin. Crosby calls Twiddy “an expert in the field with decades of experience, who presents material that might otherwise be dry and tedious with a North Carolina charm.” He also found Griffin’s background as a federal prosecutor “inspirational.”

Griffin’s Evidence and Investigatory Criminal Procedure classes, among others, have strengthened and sharpened Crosby’s beliefs about criminal justice since hearing about Abu Ghraib one decade ago, he said. “I see the importance of a competent prosecution and a zealous defense, as well as ethical law enforcement and an engaged citizenry.”

While he makes plans to reenlist, Crosby is working, through Duke Law’s Bridge to Practice Program, at the Winston-Salem branch of the Department of Veterans Affairs.
Tags:
Duke Law News 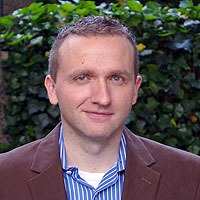