Emily May has won the Hardt Cup moot court competition for first year law students. May and co-finalist Elle Gilley argued a Fourth Amendment case before a three-judge panel on April 14.

The students argued a case in which the FBI placed a GPS monitoring device on a suspect’s vehicle during a narcotics investigation. Their arguments focused on whether or not drivers have a reasonable expectation of privacy on public roadways such that remote GPS monitoring and computerized aggregation of the collected data constitutes a search requiring a warrant under the Fourth Amendment.

The Hardt Cup involved 500 competitive rounds conducted over a three-week period; 242 students participated in Round 1 with 169 choosing to compete in the second and third rounds. The top eight argued in the quarterfinals, with four moving to the semifinal rounds. Faculty and practitioners, including a number of alumni, heard arguments in both rounds.

Students with the top 25 scores in the tournament were invited to join the Moot Court Board.
Tags:
Duke Law News 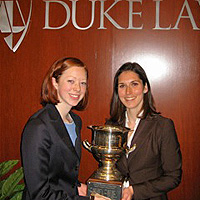