Lives in the Law: Ambassadors Anthony Harrington ’66 and Jaime Alemán ’78

Two distinguished alumni shared insights gleaned from diplomatic service during a lunchtime Lives in the Law conversation with Dean David F. Levi on Feb. 23. Jaime E. Alemán ’78, who served as ambassador of the Republic of Panama to the United States from 2009 to 2010, and Anthony Harrington ’66, who served as U.S. ambassador to Brazil from 1999 to 2001, both stressed the importance for an ambassador to build relationships with government officials and commercial leaders in the countries to which they are assigned. 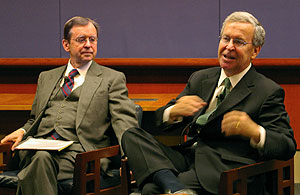 
“An ambassador’s job is government to government primarily, but it’s also to be a commercial diplomat — to be a diplomat for the U.S. business community, investment, trade, etc.,” said Harrington, who was a longtime partner at Hogan & Hartson (now Hogan Lovells) in Washington, D.C., and active in Democratic politics prior to his diplomatic appointment. He is now president and CEO of Albright Stonebridge Group, a global strategy firm, and a member of the management committee of Albright Capital management, an affiliated private investment advisory firm.

“My mission from the White House and the State Department was to upgrade the level of engagement and quality of relationships,” he said. “So I sought to build relationships beyond the government, which are useful to what I do today, as well.” His job was aided, he said, by the fact that President and Mrs. Clinton had close personal relationships with the president and first lady of Brazil and the fact that he held the post at a time when the United States “was more or less viewed in most parts of the world as the benevolent superpower.”

Charged primarily with promoting a free trade agreement between Panama and the United States, Alemán noted the challenge for a diplomat from a smaller country “to be heard” in Washington at the highest levels. “The way to do it is through personal connections, through commonalities,” said Alemán, who was 12 when his father became Panama’s ambassador to the United States. The founder of Alemán, Cordero, Galindo & Lee, Alemán has served in a variety of high-level government positions during his career. He recounted mobilizing connections from his days in prep school and at Notre Dame University and Duke Law Schools to help build connections to policy- and lawmakers, think tanks, and corporate leaders. He has benefited enormously, he said, from having become “not only bilingual but also bicultural” during his youth.

“It’s one thing to speak the language and another to love the culture,” said Alemán, a self-described “bicultural nerd” about American sports. An honorary life member of the Duke Law Board of Visitors, Alemán attends Duke basketball games whenever he has the chance.

“It’s so important, whatever you do in life, to have those personal connections — to develop those personal relationships,” Alemán advised students in the audience. He said such connections will inevitably prove both mutually beneficial and intellectually stimulating. “You need to become a globalized citizen, and this is perhaps the beginning of your training towards that objective, by going out and getting an education in another country, by meeting people from different cultures, learning other languages, and traveling as much as you can. All those things prepared me in way to be able to arrive in Washington and to be able to at least stick my neck out a little bit more than I would have been able to if I had not had the background I did.”
Tags:
Duke Law News