A three-judge panel of federal appellate judges ruled on behalf of Sarah Boyce ’12 and James Harlow ’12 in the last round of the 2011 Dean’s Cup Moot Court competition, after an oral argument about the application of the First Amendment to specialty license plates sought by an Illinois non-profit. 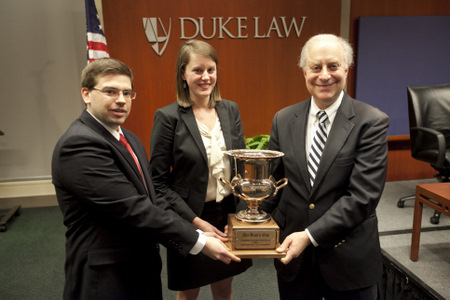 
Phil Rubin ’11 and Catherine Lawson ’12 represented the petitioner, Choose Life Illinois (CLI), and Boyce and Harlow ’12 argued on behalf of the respondent, Illinois Secretary of State Jesse White, whose office administers the day-to-day operations of vehicle licensing and registration, including the specialty plate program.

Boyce called the experience "unbelievably humbling," and Harlow said he was "honored to participate in a tournament that witnessed consistently high levels of advocacy from beginning to end."

The judges praised all the competitors, finding them so equally matched that they declined to choose the best oral advocate.

“We genuinely enjoyed this moot court,” Raggi said after the competition. “All of us judge this type of competition with regularity and this was an outstanding moot court performance by all of you, starting with the briefs, which were really excellent.”

All the competitors said they benefited from the moot court process. "I enjoyed the Dean's Cup both as a way to practice appellate advocacy and as a way to engage with professors and other students on really interesting legal questions," Rubin said.

Rubin and Lawson represented the Illinois nonprofit, an organization that promotes adoption as an alternative to abortion, in their attempt to have the state produce a specialty license plate promoting an anti-abortion message. The Illinois General Assembly refused CLI’s request for a “Choose Life” plate during its 2001-2002 session and again during its 2003-2004 session. CLI sued White in the Northern District of Illinois, claiming that the state had violated its First Amendment rights and that the specialty plate program was facially unconstitutional due to a lack of standards. CLI alleged that the state had never previously refused to approve a proposed specialty plate and that its plate was rejected because the state disagreed with its pro-life message.

The case moved through the courts, until CLI appealed to the Supreme Court, which granted its petition for certiorari on two questions: whether specialty license plates are government speech or private speech; and whether, if the plates are private speech, the State of Illinois violated CLI’s First Amendment rights when it refused to approve the “Choose Life” plate.

Initiated in 1963 by Deans E.R. Latty and J.D. Johnston, the Dean’s Cup competition is student-organized and hosted by the Moot Court Board. Students compete in pairs, initially arguing through two preliminary rounds. The eight best teams, based on their preliminary round oral argument scores, qualify for the quarterfinals, which are conducted in a round-robin format.

Participants who reach the quarterfinals are required to draft a full, 30-page brief.