Negar Amir-Haeri faced a choice after graduating from high school in her native Paris. Having studied piano since childhood, Amir-Haeri was torn between continuing her musical career or pursuing a different discipline professionally.

She chose to do both.

“Conservatories in Europe, and probably in general, have an age bar, so I chose to start with music,” she explains.

A Parisian of Iranian descent, Amir Haeri excelled musically, winning first prize several times in both the Claude Kahn and the Steinway competitions in Paris. She attended the International Conservatory of Music of Paris, and attended other conservatories in France and in Geneva, Switzerland, as a visiting student.

Then she launched her second career, an intentional counterpoint to her musical endeavors.

“I was always interested in studying law — my brother is a lawyer in France, and I always thought his work seemed interesting. And after the music, I really needed something totally different. I could have studied literature or philosophy, but I needed something more concrete. To me, the law is very concrete.”

After graduating with honors from University of Paris II Pantheon-Assas and interning in the litigation and international arbitration departments of four Parisian firms, Amir-Haeri has developed a keen understanding of the links between her artistic and legal studies.

“My thoughts about this are evolving, but I think there are some interesting ways that artistic work, or something like high-level sports, can help you learn a lot about yourself, which can help you in other fields,” she says. “In these fields, very roughly speaking, you can assess your results easily. For example, as a painter, you can look at what you have painted and see whether it is as you meant it to be. With music, you can assess whether or not you are playing Chopin’s études as fast as they are meant to be played. Very easily, you can understand what you have to improve, which helps you understand the kinds of things you do well.

“You also learn how to focus, how to concentrate on details, how to be honest with yourself about your faults. And this is also important: You gain confidence. When some aspect of law seems too complicated, I remember that I have learned some Rachmaninov piece, for instance, that is very complicated. Then everything seems possible.”

Amir-Haeri says she was persuaded to come to Duke for her LLM by a graduate of the program.

“While I was trying to decide where to go, [Assistant Dean for International Studies] Jennifer Maher introduced me to a student who was Iranian, like me. He attended Duke and he told me about the campus and the setting, which he described as very calm. All the other programs I had been accepted to were in the middle of cities, and I had lived in the Paris area my whole life, so I wanted something different. He was right, I have been very happy with the Law School.”

Describing herself as a “very demanding” student, Amir-Haeri says her classes at Duke Law have made an impression on her. “So far, International Law with Professor Helfer has been my favorite class,” she says. “He is, by far, one of the best teachers I’ve ever had.”
Tags:
Duke Law News 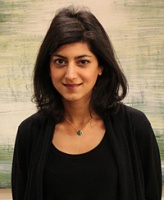