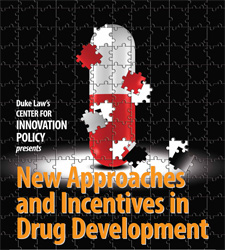 Videos and presentation materials below.

As the incentive landscape is changing, new R&D strategies are also emerging. For example, efforts are underway to find, and validate clinically, entirely new uses for existing molecules – either molecules that have been abandoned in clinical trials for lack of efficacy or generic molecules. Firms, government funders, and patient groups are also involved in a variety of different precompetitive research collaborations.

Both existing and new innovation models raise the question of how well the current incentive system works for biopharmaceutical development, particularly in the context of small molecules. Should additional or alternative economic incentives, such as targeted public funding or exclusivity terms based on research risk or disease, be considered?

This inaugural conference brought together leading figures from the private sector, government, and academia to address these questions. Morning sessions discussed the existing incentive regime and the impact of FTC v. Actavis. They also addressed how new research models, such as drug “rescue and repurposing” and precompetitive collaborations to validate drug targets, could best invoke the existing array of incentives. The afternoon session discussed how innovation incentives in drug development already differ substantially from innovation incentives in other industries. It also discussed whether additional or alternative incentives are needed.

with thanks to Stephen Johnson
of One Mind for Research