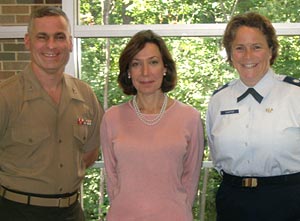 Duke Law School students will be directly involved in researching and writing briefs and helping craft strategy for the military lawyers who are defending Guantanamo Bay detainees.

In October, the Law School established the Guantanamo Defense Clinic, by special arrangement between the chief defense counsel for the detainees, Col. Dwight H. Sullivan, USMCR, Office of Military Commissions, Department of Defense, and Duke Law Professor Madeline Morris, an expert in international and humanitarian law who is serving as a legal adviser to Sullivan as well as directing the clinic. Sullivan and another member of his military defense team held an extensive meeting with the students on Oct. 27 at the Law School, briefing them on the status of the detainees' cases and brainstorming defense strategy.

“Our students have the opportunity to address complex questions of American and international law that are unique to the war on terror, such as whether terrorism is a crime and the very legitimacy of the use of military commissions for trying civilians engaged in war-like acts,” said Morris, who also teaches the classroom component of the clinic.

On November 7 five detainees were newly charged with war crimes, bringing to nine–out of a total of 505–the number of prisoners with cases pending before the military commissions authorized by President George W. Bush. The four cases on which students received briefings involve Ali Hamza Ahmed Sulayman Al Bahlul, an alleged al Qaeda propagandist; Ibrahim Ahmed Mahmoud Al Qosi, alleged to have been a long-time associate, accountant and bodyguard of Osama bin Laden; David Hicks, an Australian national alleged to have trained and fought with the Kosovo Liberation Army and with al Qaeda in Afghanistan; and Salim Ahmed Hamdan, a former driver for Osama bin Laden.

Charges levied against the detainees vary, but include conspiracy to commit attacks on civilians, murder and terrorism. Briefs drafted by clinic students have already been filed in various motions pertaining to Hicks' defense.

On Monday, the United States Supreme Court said it would hear a defense challenge to the legality of the military commissions in the case of Hamdan. While the military commissions will likely be stayed pending a ruling in that case, Morris said the defense team -- and the clinic students -- will use the time to prepare for future proceedings in all nine cases.

“I wouldn't miss this,” said third-year law student Audry Casusol, one of five students enrolled in the clinic, which will expand to accommodate 24 in the spring semester. “We are not defending any acts the detainees are alleged to have done, but their rights. The system must be fair.”

Added David Thompson, a second-year law student participating in the clinic, “I believe the international and domestic legal questions that emanate out of the United States ' decision to detain suspected terrorists in Guantanamo Bay are incredibly important. Not only do these issues have bearing on American and global security, but they also have tremendous bearing on the character of American jurisprudence.”

Duke Law Dean Katharine T. Bartlett said the establishment of the Guantanamo Defense Clinic provides a great opportunity for students and fits well with one of the school's strengths. “We are without doubt one of the strongest law schools in the country in the area of national security law, and we are on our way to being one of the strongest clinical schools as well. This is a unique opportunity for Duke and I am thrilled that Madeline Morris, with her expertise in both criminal law and human rights, was positioned to be able to take advantage of it.”