Justice Ruth Bader Ginsburg: A “Lady” Who Led the Fight for Gender Equity 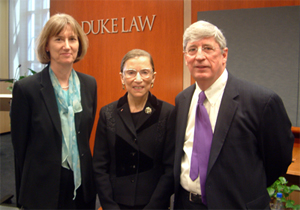 Ruth Bader Ginsburg would have been an appropriate honored guest for the “Great Lives in the Law” series even if she had never been appointed to the Supreme Court, Dean Katharine Bartlett observed in welcoming the Justice to the Law School on January 31. Bartlett cited the key role Justice Ginsburg played in shaping the law of sex discrimination, as an equal rights scholar and advocate, arguing — and winning — pivotal cases before the Court in the 1970s.

“Crucial to her approach was the principle that not only rules that discriminate against women, but also ones that appear to treat women better than men are bad for women, bad for all of us,” said Bartlett.

Interviewed by Douglas B. Maggs Professor of Law Walter Dellinger, Justice Ginsburg, a Brooklyn native, recounted the lessons she learned from her mother, who died the day before she graduated from high school.

“My mother told me two things constantly. One was to be a lady, and the other was to be independent. The latter was something very unusual…because for most girls growing up in the 1940s, the most important degree was not your B.A., but your 'Mrs.' 'Be a lady' meant don't react to situations with anger, don't consume any of your time with such emotions as envy, because they just sap energy and have no productive value.”

In spite of placing first in her class at Columbia Law School, where she completed her J.D. in 1959, and having been at the top of her 1L and 2L classes at Harvard Law School, Justice Ginsburg did not get any offers from New York firms on graduation; many refused to even interview women. Candid about her distress, it never occurred to her to challenge this overt prejudice.

"My mother told me two things constantly. One was to be a lady, and the other was to be independent."

“I thought discrimination against women came with the territory, and I just had to endure it,” she said. Following law school she clerked for two years for a judge in the Southern District of New York, and in 1963 accepted an offer to teach civil procedure at Rutgers University School of Law. There were only 20 other women teaching law in the United States at the time.

Justice Ginsburg said she began to think seriously about gender discrimination after spending the summers of 1962 and 1963 in Sweden, as a scholar of international procedure. She was particularly influenced by the arguments of a Stockholm newspaper columnist, who challenged the idea that women needed to be the exclusive caretakers of the home as well as wage-earners; in Sweden it was already common and accepted for women to work outside the home.

“The gist of it was why should a woman have two jobs and the man only have one?

And there was much discussion among women about this approach–that it wasn't enough that he took out the garbage. Some women [said] ‘Well, I can do everything…I don't need him to do anything around the house,' and others said ‘that's right and, besides, it will be much healthier for children to grow up with two caring parents, not just one.' So I began to think of it.”

Justice Ginsburg did not find any practical use for her “awakening” until the late 1960s, when students at Rutgers started asking for a course in women and the law.

“In the space of one month, I read every federal decision that had ever been written in the area of gender and the law, and every law review article. There was barely anything–less than would be produced in two months nowadays.”

Around the same time, women began to complain to the New Jersey chapter of the American Civil Liberties Union about such issues as forced unpaid maternity leave, and family health insurance plans that were available only to men. The ACLU turned to Justice Ginsburg for help.

While she and her colleagues hoped to bring a pair of cases before the Supreme Court, one involving a law that impacted adversely on a man and the other on a woman, Justice Ginsburg managed to do the latter first, arguing the case of Reed v. Reed in 1971, and successfully challenging a law that gave preference to men in administering decedents' estates.

“It was a turning point case,” she noted, adding that it was decided by the “not so liberal” Burger Court. “The Burger Court, starting in 1971, overturned literally dozens of federal and state laws.”

Asked by Professor Dellinger if constitutional law would have been different if the Equal Rights Amendment, of which she was an early advocate, had passed, Justice Ginsburg replied that it would have made an important symbolic difference.

“Every constitution written since the end of World War II includes a provision that men and women are citizens of equal stature. Ours does not. I have three granddaughters. I'd like them to be able to take out their Constitution and say ‘here is a basic premise of our system, that men and women are persons of equal citizenship stature.' But it's not in there. We just have the equal protection clause, which everyone knows was not meant in the 1860s to change anything with regard to women's status. Women didn't get to vote until 1920.”

Justice Ginsburg described the Supreme Court, which she joined in August 1993, as by far the best place she's ever worked, regardless of apparent philosophical differences between the justices.

“There's a spirit at the Court–and it's not just the justices and their staffs, it just pervades the entire institution–of being proud of the institution you serve, and wanting to give it your best, and make sure that you don't leave it in any worse shape than when you became part of the institution. There's an esprit that is uplifting and energizing. The relationship between the justices is very close, no matter how great our differences. We prize the institution in which we work, and know that it will suffer if we can't get on well with each other.”

The justices cultivate habits to promote collegiality, she went on, such as shaking hands before taking the bench, lunching together every day they sit and confer, and socializing.

Asked by a student about what she has found most personally satisfying, Justice Ginsburg responded that as a jurist and advocate “it's the satisfaction you get when you are genuinely able to persuade other minds.” She went on to relate her delight in finding out, through the papers of the late Justice Harry Blackmum, that a case she argued before the Court had been a “real cliffhanger,” with an initial vote of five-four against her position, but ending up “five-four my way, with two flip-flops along the way.”

Justice Ginsburg advised lawyers at the nascent stages of their careers to do something other than the work they are paid for.

“Whatever community organization, whether it's a women's organization, or fighting for racial justice … you will get satisfaction out of doing something to give back to the community that you never get in any other way.”

Justice Ginsburg is the third Supreme Court justice to take part in the Program in Public Law's Great Lives in the Law series; Justices Rehnquist and O'Connor have also shared their personal and professional stories.