What's in a Name?

Durham is a town of many names. Here’s a cheatsheet on the backstory:

The City of Medicine

This moniker alludes to Durham’s reputation for outstanding hospitals and the large number of major national and multinational health care and pharmaceutical companies located here. The City of Medicine boasts more than 300 health and medical companies, with a combined annual payroll of more than $1.5 billion. Nearly one in three people in Durham works in a health-related field — making medicine the city’s leading industry.

“The Triangle” is the region framed by the area’s three largest cities — Raleigh, Durham and Chapel Hill — which are home to three top universities: North Carolina State University, Duke University and the University of North Carolina at Chapel Hill. “The Triangle” originally referred to the universities, whose research facilities and educated workforce have historically served as a major attraction for businesses located in the region. Today you hear the name used to reference Research Triangle Park, a large business campus for high-tech companies and enterprises.

Despite the common pairing of Raleigh-Durham (such as with the Raleigh-Durham International Airport), they are in fact two separate — though neighboring — cities.

Durham is the home of the Durham Bulls, one of the best-known minor league baseball teams in the country thanks in part to the 1988 Kevin Costner film Bull Durham .

Durham’s bull affiliation dates back to the 1850s, when tobacco production was beginning to soar. Durham tobacco producer John Ruffin Green wanted a name and trademark that would help distinguish his tobacco. Green borrowed the idea of a bull from a popular mustard brand, and soon his "Genuine Durham Smoking Tobacco" became known simply as "Bull Durham."

If you ask us, Durham is a great town no matter what you call it. And that’s no bull! 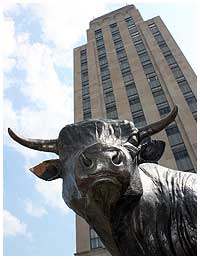