Named in honor of former Duke Law Professor Jerome Culp, a mentor of junior faculty, the program honors his legacy by assisting minority scholars and candidates in the academic market.

Diversity in legal education remains a priority for the Law School. To support this part of its mission, the Law School engages in a number of initiatives to support diversity and inclusiveness in the legal academy. As a complement to the VAP program the Law School organizes an annual three-day program, comprised of the Culp Colloquium and the Emerging Scholars Program, to assist minority scholars and candidates in the academic market in strengthening their tenure and application files.

The program opens with the Culp Colloquium, a scholarship workshop for untenured minority faculty members from law schools around the country. Duke Law faculty, joined by scholars from around the country, review and provide constructive feedback on participants' papers, research agendas, overall quality of scholarship, and presentation. Alongside Duke Law faculty, the participants then serve as mentors in the Emerging Scholars Program, which takes place over the next two days. Minority entry-level candidates, as well as those who recently secured academic jobs to start the following fall, receive advice and feedback on interviewing and other skills, how to balance research and teaching responsibilities, and other tools for success on the academic market and in academia generally. In addition to the substantive and practical value of sessions such as mock interviews and job talks, participants benefit from the relationships they form with Duke Law faculty and other scholars of color. Moreover, the sustained nature of the program—entry-level candidates return the following year, after securing jobs, and then again to participate in the Culp Colloquium—increases the probability that participants will achieve long-term career success. 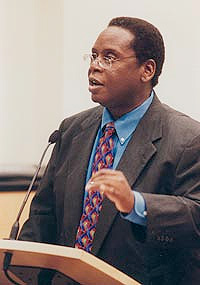 Professor Culp was a member of the Duke Law faculty from 1985 until his death on February 5, 2004. He was a prolific scholar, internationally known for his work on race and the law. He was the author of numerous books and articles on the subjects of critical race theory, justice and equality, law and economics, and labor economics. He also taught in the fields of torts, employment discrimination, and sexuality and the law. Professor Culp was known for being a dedicated teacher, mentor, a friend to students, and an avid fan of Duke Basketball.

Access to current year schedules and files are password protected for participants only. For more information, please email the Center at CLRP@law.duke.edu.