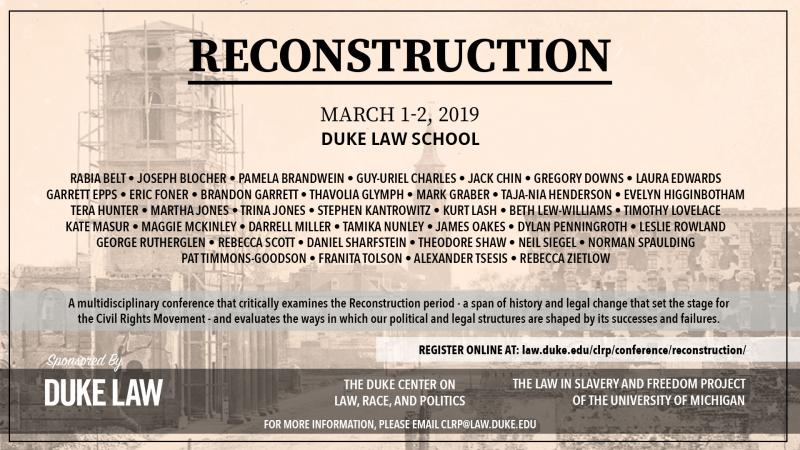 The Duke Center on Law, Race, and Politics and the Law in Slavery and Freedom Project of the University of Michigan will hold their Reconstruction Conference on March 1-2, 2019 at Duke Law School.

No less than the Founding of the nation, Reconstruction represents a defining era of American history. Yet, Reconstruction is not fully understood by most Americans, and its profound effects are not fully appreciated. Reconstruction changed state laws; created and destroyed civil and political institutions; gave rise to a civil rights infrastructure; redefined the relationship between the national and state governments and between the national government and the Supreme Court; produced movements and counter-movements; and framed the rhetoric within which equality and citizenship are debated and constructed even today.

This conference will critically reexamine the Reconstruction period, the Reconstruction Amendments, and the post-Reconstruction period (the so-called “Redemption” era) -- a span of history and legal change that set the stage for the Civil Rights Movement -- and will evaluate the ways in which our contemporary political and legal structure are shaped by the failures and successes of the Reconstruction project. Consequently, the conference will focus on a number of themes, including: the history and mechanics of Reconstruction; the rhetoric of Redemption and white supremacy; the role of the Supreme Court in advancing or inhibiting the aims of Reconstruction; the creation and impact of Civil Rights statutes; the role of social movements, mobilization, and counter-mobilization in redefining personhood, citizenship, and the political community; and the relationship between the national government and the states in sustaining a multicultural America.

The Reconstruction Conference is proudly co-sponsored by the Law in Slavery and Freedom Project. The Law in Slavery and Freedom Project is a curricular and research initiative based at the University of Michigan Law School that brings together scholars and students to exchange ideas on the history of law and slavery in the Atlantic world. Over the past fifteen years, the Project has co-sponsored seminars and workshops with colleagues at Michigan; at the Ecole des Hautes Etudes en Sciences Sociales in Paris; at the Juan Marinello Institute in Havana; and at the State University in Campinas and the Federal University of Santa Catarina, both in Brazil. Rebecca J. Scott (UM), Martha S. Jones (Johns Hopkins), and Jean M. Hebrard (EHESS) co-direct the Project, which counts more than thirty international collaborators.

The schedule for the conference can be found here.

Registration is now closed. If you are still interested in attending, please email clrp@law.duke.edu.

Registration for the conference is now closed.

On Friday, March 1st and Saturday, March 2nd, parking will be available in the Science Drive Parking Garage. Permits will be given out for all day parking in this lot. The parking garage is accessible off of Cameron Blvd. (also known as 751). This parking lot is located on the corner of Cameron Blvd. and Science Dr.

For information regarding registration, logistics and travel, please contact Leanna Doty at leanna.doty@law.duke.edu