Lessons for the United States?

An international conference at Duke University School of Law

In a globalizing world of interdependent legal systems, determining which laws apply to international private transactions is crucial. Choice of Law, the field that deals with these questions, was once so vibrant in the U.S. that we spoke of a veritable choice-of-law-revolution in the sixties and seventies. At that time, Europeans watched, with a mixture of fascination and disdain, these developments at the forefront of scholarship in this field.

Now, the pendulum has swung. The field is in a crisis in the United States, unattractive to scholars, and disliked by courts. By contrast, it is thriving in Europe. The most important choice-of-law questions are being addressed wholesale in the European Union. Rules are being unified in Europe-wide codifications, especially two regulations promulgated in 2007 and 2008 dealing with contractual and non-contractual obligations, respectively.The European Court of Justice is rendering important decisions and academics are engaging in active discussions and debates.

This conference brings together leading scholars from both the United States and Europe to engage in debate and comparative examination of approaches taken in Europe and the United States, with an eye towards renewing interest here in the United States. Methodological issues to be discussed include, federalization of choice of law, choice of law as an instrument of market regulation and methodological approaches. Substantive issues include choice of law in family, tort, contract, and corporate law. There will be ample time for the panelists to field questions and discuss these issues with those attending.

The webcast of the conference is available for viewing in five parts: Part 1, Part 2, Part 3, Part 4, and Part 5. 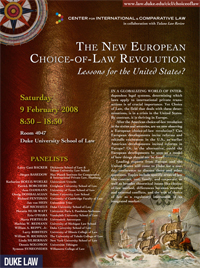 Register for the conference by downloading the form and sending it in by fax or mail. Registration for this conference is free but required. There is a fee of $50 if you will be seeking CLE credit.
The conference has been approved for 6.25 hours of Continuing Legal Education credit with the State Bar of North Carolina. Instructions and appropriate documentation for applying in states other than NC will be provided to attendees. The payment needs to accompany the registration form.

For questions, please contact either Stephen Bornick or Neylân Gürel.